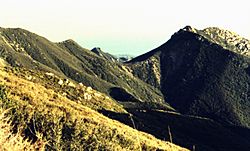 Henry E. Bothin (pronounced, "bo-THEEN") (d. 1923), of Ohio, came to San Francisco where he built an empire, starting with a spice and coffee factory in 1875, and then gaining large commercial real estate holdings. He was president of Judson Manufacturing Company. Around 1916, Bothin and his second wife, the heiress Ellen "Nellie" Chabot Bothin (1865-1965), added the 350-acre (1.4 km2) Mar Y Cel property, commonly referred to as the "Tea Gardens", to their Montecito estate home, Piranhurst, which was nearing completion. Ellen's deceased father, Antoine "Anthony" Chabot, had been notable for his Bay Area water systems, and had been a colleague of Bothin's. Upon Mar Y Cel, the Bothins built stone aqueducts, water works, arches, and statues. The water projects included scalloped bowls that rested on columns, allowing water to spill from one into the other. After completion, 35 gardeners maintained the area. Other construction included a 200-seat amphitheater, as well as the "Tea House", built as an open-air piazza, surrounded by four walls. In 1918, Ellen was honored with a gladiolus named in her behalf, the Mrs. H. E. Bothin.

After Ellen's death, Edward F. Brown purchased a portion of Piranhurst from the family heirs, that led to the "Tea Gardens" property becoming a separate parcel which the Bothin family sold to Mr. Shirley Carter Burden (1908-1989), fine arts photographer, writer, and great-great-grandson of Cornelius Vanderbilt. Burden later resold it to the current owners.

In September 2000, Cima del Mundo LLC, an environmental investment group, offered to donate a conservation easement on a portion of Mar Y Cel: the northern 150 acres (0.61 km2). This eliminated the possibility of future residential development while ensuring the protection of both wildlife habitat and the property's scenic beauty. In addition, the company granted a .5 miles (0.80 km) easement to the Land Trust ensuring that a portion of the Cold Spring Trail is open for public use.

On November 13, 2008, the Montecito Tea Fire ignited the historic "Tea House" structure, above Mountain Drive. Over the course of several days, the fire spread and burned 1,940 acres (8 km2), destroyed over 200 homes, and injured 13 people.

All content from Kiddle encyclopedia articles (including the article images and facts) can be freely used under Attribution-ShareAlike license, unless stated otherwise. Cite this article:
Mar Y Cel Facts for Kids. Kiddle Encyclopedia.