Marah macrocarpa (sometimes spelled Marah macrocarpus), known as chilicothe, wild cucumber, bigroot or regionally as space pods is a species of plant in the genus Marah. 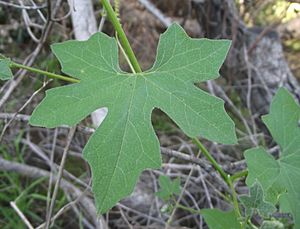 Marah macrocarpa has the most pubescent shoots, stems, and leaves of all the Marah species native to California - this being consistent with its range having the most xeric climate. Vines appear in late winter in response to increased rainfall, and can climb or scramble to a length of 6 metres (20 ft).

Vines emerge from a large, hard tuberous root which can reach several meters in length and weigh in excess of 100 kilograms (220 lb). Vines develop leaves and, particularly, flowers and fruit very quickly, often with the first nodes of the quick-growing vines containing male and female flower heads. Its leaves typically have five lobes with individual plants showing wide variation in leaf size and lobe length.

The flower can vary in color from yellowish green to cream to white. Flowers appear soon after the vine emerges. The flowers are monoecious, that is, individual flowers are either male or female, but both sexes can be found on the same plant. Male flowers appear in open clusters while females flowers, distinguished by a swollen base, usually appear individually. The plant is self-fertile, i.e. pollen from the male flowers can fertilise the female flowers on the same plant; pollination is by insects. 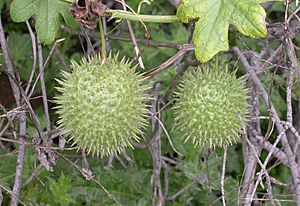 The fruit is longer than it is wide, 5–6 cm in diameter and 15–20 cm long, and covered in prickles of variable density, up to 1 cm long but without hooks. Unripe fruit are bright green, ripening to yellow. The fruit swells as it ripens until finally rupturing and releasing the large seeds. Fruit begin to form in late winter and ripen by early summer.

Seeds of Marah macrocarpa are large, hard, and very smooth. Southern California manroot has larger, longer seeds than the other manroot species except for Marah horridus. Fruits usually hold four or more seeds. Seeds sprout in the cool wetness of late winter. Seeds have an intriguing germination process. The initial shoot emerges from the seed and grows downward into the earth. This shoot then splits, one part beginning to swell and form the tuber, while the second part grows back to the surface and becomes the vine.

The plant is native to Southern California and Baja California. Its range extends from the Transverse Ranges and Channel Islands through the Peninsular Ranges.

It grows by streams, in washes, and on slopes in chaparral and oak woodlands, at elevations up to 900 m (3,000 ft). It will tolerate a variety of soil types and acidities, but it requires seasonally moist soil. Vines can grow in full-sun to partially shaded conditions. It emerges soon after winter rains begin, grows until late spring, and dies back completely in the heat and dryness of summer.

All parts of the plant have a bitter taste (this is the meaning of the genus name Marah, which comes from Hebrew). Despite this, the leaves have been used as a vegetable. The large tuber of the manroot can be processed for a soap-like extract.

All content from Kiddle encyclopedia articles (including the article images and facts) can be freely used under Attribution-ShareAlike license, unless stated otherwise. Cite this article:
Marah macrocarpa Facts for Kids. Kiddle Encyclopedia.