Goc saw action in 699 NHL contests, played 388 games in the DEL and won 112 caps for the German men's national team. He won a silver medal at the 2018 Olympic Games.

As a youth, Goc played in the 1996 and 1997 Quebec International Pee-Wee Hockey Tournaments with a team from Baden-Württemberg.

Goc was drafted in the first round, 20th overall by the Sharks in the 2001 NHL Entry Draft, though he remained in Germany until 2003. He spent all of the 2003–04 season with the Cleveland Barons, the Sharks' then minor league affiliate, but joined the Sharks during the 2004 playoffs. He holds the franchise record in Cleveland for longest assist streak (7 games).

In his first NHL game, Game 5 of the Western Conference Quarterfinals against the St. Louis Blues, Goc assisted on the series-clinching goal by deflecting the puck away from Blues goaltender Chris Osgood and right to Mark Smith. Then, in his second game, Game 6 of the Western Conference Semifinals against the Colorado Avalanche, he scored the series-clinching goal by deflecting a shot past Avalanche goaltender David Aebischer.

Goc signed a three-year contract as a free agent worth $5.1 million with the Florida Panthers on 1 July 2011. On 11 October 2011, Goc scored his first goal with the Panthers against the Pittsburgh Penguins.

On 5 March 2014, Goc was traded to the Pittsburgh Penguins for a 3rd and a 5th round pick. As a free agent Goc re-signed with the Penguins to a $1.2 million contract.

In the following 2014–15 season, on 22 October 2014, in a 5–3 loss to the Philadelphia Flyers, Goc scored his first goal with the Penguins. After 43 games with the Penguins on 27 January 2015, Goc was traded to the St. Louis Blues in exchange for Maxim Lapierre. 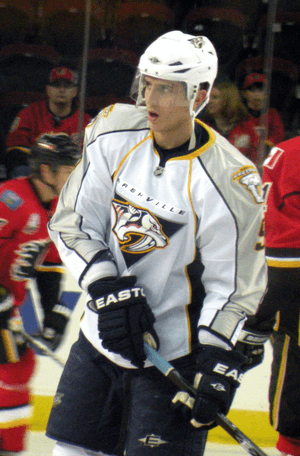 Goc warming up before a game during his tenure with the Nashville Predators.

On September 1, 2015, as a free agent, Goc signalled the end of his NHL career in returning to Germany to sign a five-year contract with reigning Champions, Adler Mannheim of the DEL. In January 2017, he suffered a torn ACL and had to undergo surgery. Goc announced his retirement as a player in March 2020, but stayed with the Mannheim club, joining the coaching staff as a skills and development coach.

Touted for his defensive prowess and faceoff skills, Goc was a fixture on Team Germany for 18 years. In April 2018, he announced the end of his international career after 112 caps, 17 goals and 18 assists for Germany.

All content from Kiddle encyclopedia articles (including the article images and facts) can be freely used under Attribution-ShareAlike license, unless stated otherwise. Cite this article:
Marcel Goc Facts for Kids. Kiddle Encyclopedia.