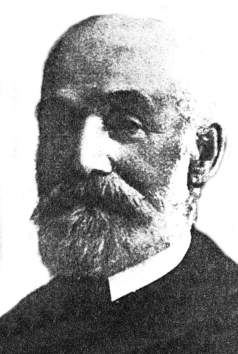 Jones was born in Pawlet, Rutland County, Vermont, a son of Ephraim and Sophia (Page) Jones. In 1858, Jones moved to DuPage County Illinois. He lived in Danby (now Glen Ellyn), until the American Civil War when Abraham Lincoln called for volunteers.

Jones enlisted in Company E of the 8th Illinois Cavalry on August 5, 1861. He was commissioned a second lieutenant on December 5, 1862, first lieutenant July 4, 1864, and captain on October 10, 1864. All three commissions were signed by Illinois Governor Richard Yates.

On July 1, 1863 at Gettysburg, Jones commanded one of the regiment's sentry posts on the Chambersburg Pike, the road Robert E. Lee's Confederate army used to march from Cashtown to Gettysburg. About 7:30 a.m., Jones noticed a cloud of dust on the road to the west, indicating that the Confederates were approaching. At that point, Jones borrowed Corporal Levi S. Shafer's carbine, aimed it with the assistance of a fence rail, and fired a shot at "an officer on a white or light gray horse." His was the first of approximately one million shots that would be fired at Gettysburg over the next three days.

In 1886 a memorial was placed at the location where Jones fired the first shot of the battle. Jones was present for the dedication of the memorial, which remains on the north side of U.S. Route 30 (Chambersburg Pike) at the intersection of Knoxlyn Road.

Marcellus E. Jones died on October 9, 1900 and was buried at Wheaton Cemetery in Wheaton, Illinois.

All content from Kiddle encyclopedia articles (including the article images and facts) can be freely used under Attribution-ShareAlike license, unless stated otherwise. Cite this article:
Marcellus Jones Facts for Kids. Kiddle Encyclopedia.