Kids Encyclopedia Facts
For the Mexican footballer, see Marco Jovanni Rojas.
Not to be confused with Marcos Rojo.

Marco Rodrigo Rojas (born 5 November 1991) is a New Zealand professional footballer who plays as a winger or attacking midfielder for Melbourne Victory and the New Zealand national team. During his time in the A-League with Melbourne Victory, Rojas was dubbed the Kiwi Messi by fans for his ability on the ball and goalscoring prowess.

Rojas attended Aberdeen Primary School and Maeroa Intermediate School during the late 1990s and early-mid-2000s. He is of Chilean descent.

Marco Rojas came through Wynton Rufer's Wynrs football academy. He also trialled with Caleb Rufer at Werder Bremen, Hannover 96 and B Monchengladbach. Neither player was successful but later on Rojas was awarded a trial with the Wellington Phoenix after winning the "Retro Ricki Youth Scholarship" from the Yellow Fever. Rojas impressed Wellington coach Ricki Herbert and put in some good performances in the Phoenix's warm up friendlies resulting in him getting offered a 2-year contract with the A-League side.

On 13 September 2009, he made his senior debut in the A-League for the Wellington Phoenix against Melbourne Victory at the age of 17, coming off the bench as a 77th minute substitution for Daniel making him the second youngest player to play for the Phoenix behind Kosta Barbarouses. Rojas got his second appearance for the Phoenix when he was substituted on for Paul Ifill in the 73rd minute against Central Coast Mariners on 27 September 2009.

Rojas scored his first goal on his full debut for the Phoenix on 18 December 2010 in a 4–0 victory over the Newcastle Jets. His second goal was in the 72nd minute on 5 January against Melbourne Victory helping them secure a 2–0 win at Westpac Stadium. Rojas provided the assist for Chris Greenacre's opening goal in a 3–1 win over North Queensland Fury in the Phoenix's final home game of the 2010–11 season.

On 27 February 2011, Wellington Phoenix announced that Rojas declined to sign a new contract with the club and wanted to move on. Following this announcement, some media outlets claimed unofficially that Rojas had signed for Melbourne Victory, however, officially, Melbourne coach Ernie Merrick denied this. It was believed at the time that Melbourne Victory, Adelaide United and a South American club were vying for the signature of the highly rated youngster. 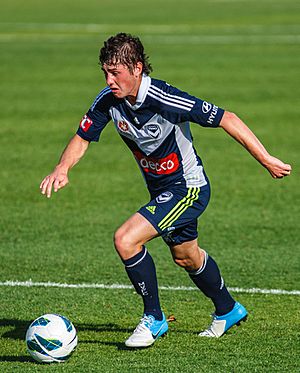 Rojas playing for the Victory in 2012

On 11 March 2011, Melbourne Victory ended weeks of speculation by officially confirming that they had indeed signed Rojas, securing him on a two-year deal.

At the A-League end of season awards for the 2012–13 season, Rojas won both the Johnny Warren Medal and the A-League Young Footballer of the Year awards.

On 18 April 2013, Rojas quit Melbourne Victory to pursue a career in Europe. His contract with Melbourne expired on 30 April 2013. 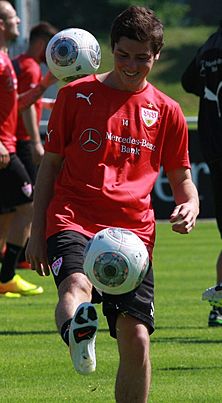 Rojas moved during the 2013–14 season to VfB Stuttgart. On 8 May 2013, Marco Rojas signed a contract until June 2017 with VfB Stuttgart. He joined the Bundesliga side on a free transfer from Melbourne Victory.

On 10 July 2013, Marco started his first game for Die Schwaben in a pre-season friendly match against the local Hohenlohe-Selection at the Schönebürgstadion, Crailsheim. Marco scored his first goal for his new club in this game to give VfB a 4–0 lead just before half time, VfB went on to win the match 5–0.

On 17 July 2013, Marco suffered an injury setback during training that sidelined the Kiwi international for between four and six weeks. Media sources revealed Rojas had broken a bone in his foot. Rojas however continued to swim, cycle and perform weight training but he was unable to continue football related activities until after the new 1. Bundesliga season began in early August.

On 21 August 2014, Rojas was loaned out to SpVgg Greuther Fürth. In January 2015 the loan deal was terminated.

On 25 August 2016, Rojas returned to the A-League with former club Melbourne Victory, signing a two-year deal. His first goal on return was the sole goal for Victory in a disappointing Melbourne Derby clash. The following week, Rojas scored a match-winner at the last minute of stoppage time against Adelaide United. His performances in the first half of the season, have been voted by Mark Bosnich as the best the A-League has ever seen.

In July 2017, Rojas joined Dutch club SC Heerenveen on a two-year contract with the option of a third year.

SønderjyskE confirmed the signing of Rojas on 22 January 2019. He signed a one-year contract with an option to extend it further, and got shirt number 17. However, his contract wasn't extended and he left the club by the end of 2019.

On 22 January 2020, Melbourne Victory announced that he had again signed for the club on a two-and-a-half year deal.

On 8 March 2011, Rojas was called up to play to a 30-man squad for the upcoming games against China and Japan for New Zealand's national team the All Whites. He made his debut as a second-half substitute in the 1–1 draw with China on 25 March 2011 before he made any appearance for any other junior New Zealand sides. The scheduled match against Japan was called off due to logistics and safety concerns following the 2011 Tōhoku earthquake and tsunami. He gained his 2nd International cap against Australia, 5 May 2011 he came on as a second-half substitute. Australia won the game 5–0

Rojas was selected for the New Zealand U-20 team to compete in the 2011 OFC U-20 Championship in April 2011 and the Suwon Cup in Korea. During the OFC U-20 championship he played in all four matches helping the Junior All Whites win the tournament and secure qualification to the 2011 FIFA U-20 World Cup.

During the junior All Whites game against Uruguay in the 2011 under-20 World Cup, Rojas contributed to the goal that put New Zealand in the lead at 54 minutes (the game finished in a 1–1 draw).

All content from Kiddle encyclopedia articles (including the article images and facts) can be freely used under Attribution-ShareAlike license, unless stated otherwise. Cite this article:
Marco Rojas Facts for Kids. Kiddle Encyclopedia.