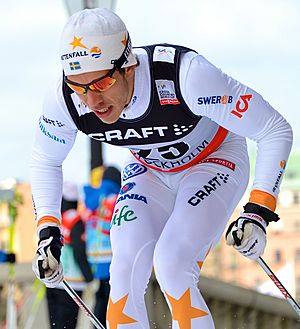 Hellner had a total of seven victories in the junior levels of cross-country skiing up to 30 km from 2003 to 2005. In Gällivare, Sweden, he took his first world cup win on a 15 km event.

Hellner won bronze, his first medal, in the 4 × 10 km relay at the 2007 FIS Nordic World Ski Championships in Sapporo.

In the 2010 Winter Olympics in Vancouver, Hellner won his first Olympic gold medal in the 30 km skiathlon, deciding the race in a sprint at the end. At the 4 × 10 km relay, Hellner took gold for Sweden after leading the race from the very start.

In the 2011 FIS Nordic World Ski Championships in Oslo, Hellner opened his championship with winning a victory in the men's sprint. A couple of days later, Hellner, like in the 2010 Winter Olympics, rode the last lap for Sweden in the 4 × 10 km relay. This time finishing second, winning a silver medal for Sweden.

In the 2012, Hellner became the first Swedish male skier to be on the podium in Tour de Ski by securing a second place overall after passing Petter Northug in the final uphill event.

On 6 May 2018, his retirement from cross–country skiing was announced.

All results are sourced from the International Ski Federation (FIS).

All content from Kiddle encyclopedia articles (including the article images and facts) can be freely used under Attribution-ShareAlike license, unless stated otherwise. Cite this article:
Marcus Hellner Facts for Kids. Kiddle Encyclopedia.