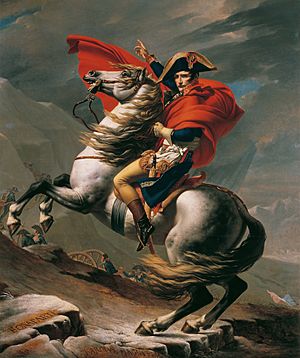 Napoleon Crossing the Alps painted by Jacques-Louis David. The horse in the painting is believed to be Marengo. 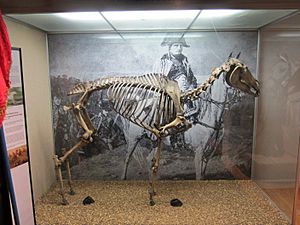 Marengo's skeleton on display in November 2011

Marengo (c. 1793–1831) was the famous war horse of Napoleon I of France. Named after the Battle of Marengo, through which he carried his rider safely, Marengo was imported to France from Egypt following the Battle of Abukir in 1799 as a six-year-old. The grey Arabian was probably bred at the famous El Naseri Stud. Although small (only 14.1 hands (57 inches, 145 cm)) he was a reliable, steady, and courageous mount.

Marengo was wounded eight times in his career, and carried the Emperor in the Battle of Austerlitz, Battle of Jena-Auerstedt, Battle of Wagram, and Battle of Waterloo. He also was frequently used in the 80-mile gallops from Valladolid to Burgos, which he often completed in five hours. As one of 52 horses in Napoleon's personal stud, Marengo fled with these horses when it was raided by Russians in 1812, surviving the retreat from Moscow; however, the stallion was captured in 1815 at the Battle of Waterloo by William Petre, 11th Baron Petre.

Petre brought the horse back to the United Kingdom and sold him on to Lieutenant-Colonel Angerstein of the Grenadier Guards. Marengo stood at stud (unsuccessfully) at New Barnes, near Ely, at the age of 27. He eventually died at the old age of 38, and his skeleton (minus two hooves) was preserved and later passed to the Royal United Services Institute and is now on display at the National Army Museum in Chelsea, London. One of the remaining hooves was given to the officers of the Brigade of Guards by John Julius Angerstein as a snuff box. The fourth hoof was mounted as a silver inkwell and retained by the family; it is still owned by the family but is now on loan to the Household Cavalry Museum. The Duke of Wellington was asked to disinter his own horse, Copenhagen, to be exhibited alongside Marengo, but refused to do so. Coincidentally, one of Copenhagen's hooves was also later used as an ornament.

All content from Kiddle encyclopedia articles (including the article images and facts) can be freely used under Attribution-ShareAlike license, unless stated otherwise. Cite this article:
Marengo (horse) Facts for Kids. Kiddle Encyclopedia.