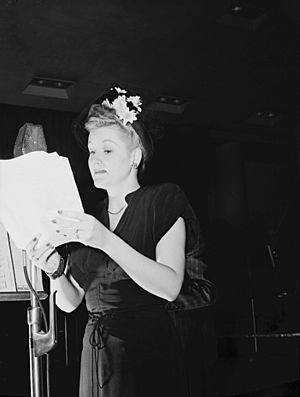 Whiting was born in Detroit in 1924 into a musical family. Her father, Dick Whiting, was a song writer, and her mother, Eleanor Whiting, managed several performers. She began her recording career while she was still a teenager. Her father had worked with Johnny Mercer, and Mercer wrote songs and recorded with Whiting. Their duet, Baby It's Cold Outside, was huge hit.

All content from Kiddle encyclopedia articles (including the article images and facts) can be freely used under Attribution-ShareAlike license, unless stated otherwise. Cite this article:
Margaret Whiting Facts for Kids. Kiddle Encyclopedia.