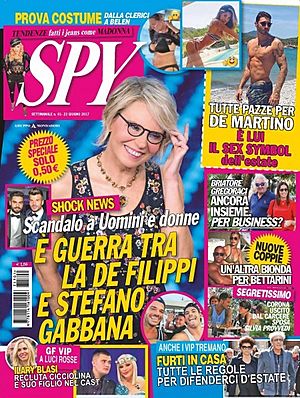 De Filippi was born in Milan, Lombardy, but grew up in Pavia where her family moved when she was ten years old. She is married to talk show host Maurizio Costanzo with whom she has an adopted son.

She has hosted numerous talk shows (mostly trashic) broadcast by Mediaset's Canale 5 such as Uomini e donne and C'e posta per te. From 1993 until the present day (2018), she has hosted on Canale 5 the talent show Amici (before was a simply talk show) which changed its name in 2002 to Amici di Maria De Filippi. Similar to the American series Fame, it features a school with two groups of aspiring young singers and dancers who compete against the other, performing live before an audience, and a panel of judges and instructors. Albanian-born dancer Kledi Kadiu was a regular performer on the programme.

In 2001 she hosted Telegatto with Gerry Scotti. Since 2009, she has been one of Italia's Got Talent's judges and producers.

Marco Carta, Valerio Scanu and Emma Marrone, three singers whose careers were launched through Amici, all subsequently went on to win first place in the prestigious Sanremo Music Festival in 2009, 2010, and 2012 respectively.

All content from Kiddle encyclopedia articles (including the article images and facts) can be freely used under Attribution-ShareAlike license, unless stated otherwise. Cite this article:
Maria De Filippi Facts for Kids. Kiddle Encyclopedia.