The museum was founded in 1930 by Archer Milton Huntington, son of Collis P. Huntington, a railroad builder who brought the Chesapeake and Ohio Railway to Warwick County, Virginia, and who founded the City of Newport News, its coal export facilities, and Newport News Shipbuilding in the late 19th century.

Huntington and his wife Anna acquired 800 acres (320 ha) of land that now holds 90,000 square feet (8,400 m2) of exhibition galleries, a research library, a 167-acre (68 ha) lake, a five-mile shoreline trail with 14 bridges, and over 35,000 maritime artifacts from around the world. After the land acquisition took place, the first two years were devoted to creating and improving a natural park and constructing a dam to create The Mariners' Lake.

The museum offers educational programs for all ages and a large research library and archives, as well as publications and Internet resources for teachers. The largest boat in its collection is the Oracle Team USA 17, the yacht that won the 2013 America's Cup. 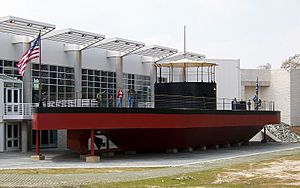 The Mariners' Museum is home to the USS Monitor Center. The ironclad Monitor was made famous in the Battle of Hampton Roads in 1862 during the American Civil War, and its remains were located on the floor of the Atlantic Ocean about 16 miles southeast of Cape Hatteras, North Carolina. The wreck site was designated as the United States' first national marine sanctuary, the only one of the 13 national marine sanctuaries created to protect a cultural resource rather than a natural resource or a mix of natural and cultural resources.

Many artifacts from Monitor have been brought to the museum, including her turret, propeller, anchor, engine, and some personal effects of the crew. For several years, they were conserved in special tanks to stabilize the metal. The USS Monitor Center officially opened on March 9, 2007, and displays include a full-scale replica, the original recovered turret, and many artifacts and related items. Current efforts are focused on restoring the engine. 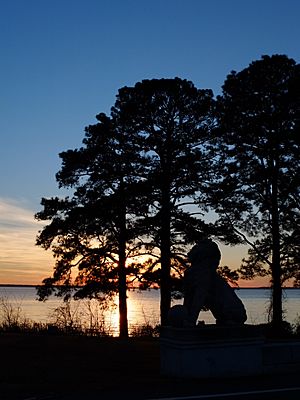 Sunset on the James, as seen from the Lions Bridge

The Mariners' Museum Park is 550 acres of privately maintained, naturally wooded property that offers visitors a quiet and serene place to walk, run, or picnic. Within the Park is the 167-acre The Mariners' Lake.

The Mariners’ Museum Park is open daily to the public. Benches at approximately every half-mile offer places of rest along the trail, and views of The Mariners' Lake can be found around every corner.

The famous Lions Bridge, a dam that provides a scenic view of the James River, remains a highlight for visitors—a perfect family gathering place to enjoy the Museum Park. The beauty of the dam is enhanced by several fine pieces of statuary designed by Anna Hyatt Huntington, sculptor and wife of Museum founder Archer Milton Huntington. Four stone lions were mounted on the ends of the parapets of the dam in October 1932. Anna also created and dedicated a monument entitled Conquering the Wild that overlooks the Lions Bridge, the park, and The Mariners' Lake.

All content from Kiddle encyclopedia articles (including the article images and facts) can be freely used under Attribution-ShareAlike license, unless stated otherwise. Cite this article:
Mariners' Museum and Park Facts for Kids. Kiddle Encyclopedia.