Warwick County (shaded in orange on this 1895 map) was originally one of the eight shires created in colonial Virginia in 1634. It was consolidated with the independent city of Newport News in 1958. 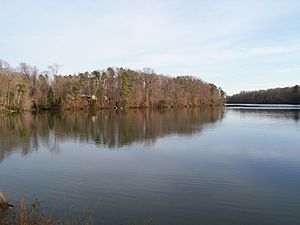 Skiffe's Creek formed the border of Warwick County and James City County beginning in 1634. It is a tributary of the James River

Warwick County was a county in Southeast Virginia that was created from Warwick River Shire, one of eight created in the Virginia Colony in 1634. It became the City of Warwick on July 16, 1952. Located on the Virginia Peninsula on the northern bank of the James River between Hampton Roads and Jamestown, the area consisted primarily of farms and small unincorporated villages until the arrival of the Peninsula Extension of the Chesapeake and Ohio Railway in 1881 and development led by industrialist Collis P. Huntington.

With the railroad came the coal piers, several local stations in Warwick County for passenger service and shipping produce and seafood to markets, and a branch link to the resorts and military facilities in neighboring Elizabeth City County at Old Point Comfort. The community at the southeastern edge on the harbor of Hampton Roads became Newport News in 1896, hosting the world's largest shipyard.

At the outset of World War I, the U.S. Army facility which became Fort Eustis was established in the county. After the war, Camp Patrick Henry, a former military facility, became the site of Newport News/Williamsburg International Airport. After sparring over annexations and exploring various plans to refine and/or combine local governments, by mutual agreement, after existing for over 325 years, the former city of Warwick was politically consolidated with the younger city of Newport News on July 1, 1958. The better known name of "Newport News" was assumed for the combined entity, forming one of the contemporary cities of Hampton Roads.

During the 17th century, shortly after establishment of the settlement at Jamestown in 1607, English settlers explored and began settling the areas adjacent to Hampton Roads. By 1634, the English colony of Virginia consisted of eight shires or counties with a total population of approximately 5,000 inhabitants.

The first courthouse and jail were located at Warwick Towne, established in 1680. The colonial port was located at Deep Creek and the Warwick River on 50 acres (200,000 m2) of Samuel Mathews' land.

In 1790, Warwick County recorded 1,690 persons in the Federal Census, making it the third smallest county population-wise in Virginia. After the American Revolution, in 1809, Warwick Towne was abandoned, and the county seat was moved to the area of Denbigh Plantation, near Stoney Run.

The new county seat was at Denbigh, where in 1810 Warwick's first brick courthouse was built. It also served as clerk's office and jail. In 1884, a large courthouse was erected on the same tract, the clerk retaining the old building. Both served until the merger with the city of Newport News in 1958.

Immediately after the end of the American Civil War in 1865, land agents began acquiring land in Warwick County for Collis P. Huntington, the railroad magnate, for "future enterprise". On the basis of these land purchases, the original city of Newport News was to be built at the southern end of the county. In 1880, Huntington formed the Old Dominion Land Company, to which he turned over his holdings. The following year, in 1881, it was announced that Newport News had been chosen as the Atlantic deep water terminus of the Chesapeake and Ohio Railway (C&O). Construction work on the C&O's Peninsula Extension began at Newport News Point in December 1880. A second crew began building east from Richmond in February 1881. They met 1.25 miles (2.01 km) west of Williamsburg on October 16, 1881, just three days before.

The C&O provided the promised transportation by rail to the Yorktown Centennial on October 19. During the next few years, Huntington developed the southeastern area of the county extensively, notably building the new Hotel Warwick. In 1886, Huntington established Newport News Shipbuilding and Drydock Company.

The boom community of Newport News became an independent city in 1896 by an act of the Virginia General Assembly, one of the few cities in Virginia to have never been incorporated as a town and it became Virginia's third largest city in population at one time.

In 1918, Warwick County was the site of a new military installation, Camp Abraham Eustis, later renamed Fort Eustis. The U.S. Army base was constructed near the mouth of the Warwick River and included Mulberry Island. Lee Hall, Virginia was the closest railroad station and handled great volumes of troop traffic, especially during World War II.

All content from Kiddle encyclopedia articles (including the article images and facts) can be freely used under Attribution-ShareAlike license, unless stated otherwise. Cite this article:
Warwick County, Virginia Facts for Kids. Kiddle Encyclopedia.