Marko Anttila (born May 27, 1985) is a Finnish professional ice hockey forward. He currently plays for Jokerit of the Kontinental Hockey League (KHL). Anttila was selected by Chicago Blackhawks in the 9th round (260th overall) of the 2004 NHL Entry Draft. His large physical stature has earned him the nickname the Groke. 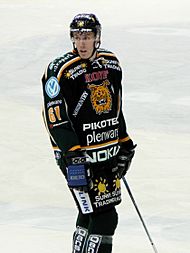 Anttila scored 38 points in 22 Suomi-sarja regular season games during his debut season. Though playing in the 3rd highest level in Finland, Anttila was drafted by the Chicago Blackhawks in the 2004 NHL Entry Draft while he was playing for LeKi. It is believed that Anttila's connections with Chicago's scout for Finland, Sakari Pietilä, was the reason why he was drafted. His large size (over 6'8 ft tall) combined to his hard slap shot were the most convincing factors that influenced Sakari Pietilä suggested him to the Blackhawks.

After being drafted while playing for small town's team, Anttila soon was reckoned as a player to invest on. Marko Anttila was contracted by Ilves in 2004. Anttila struggled during his first season in SM-liiga but soon got the hand of playing in bigger levels.

In 2007–08, Anttila scored his SM-liiga career-high when he racked 23 points in 56 games and he was selected to play for Finnish National team during the European Hockey Tour.

On 26 April 2011, Anttila made a one-year contract with TPS. In June 2013 it was announced that Anttila would join Metallurg Novokuznetsk of the KHL.

After parts of three seasons with Örebro HK of the Swedish Hockey League, Anttila returned to the KHL, linking up on a one-year deal with Finnish-based club, Jokerit on April 20, 2016.

In the midst of the 2016–17 season, having added a physical presence to the checking lines, Anttila agreed to a two-year contract extension to remain with Jokerit on January 8, 2017.

In 2019, Anttila served as captain when Finland won their third gold medal in the Ice Hockey World Championships. In the semi-final game against Russia, he scored the only goal. In the final against Canada he scored two goals including the game-winning goal leading Finland to a 3–1 victory.

All content from Kiddle encyclopedia articles (including the article images and facts) can be freely used under Attribution-ShareAlike license, unless stated otherwise. Cite this article:
Marko Anttila Facts for Kids. Kiddle Encyclopedia.