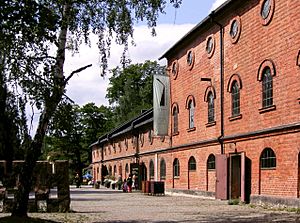 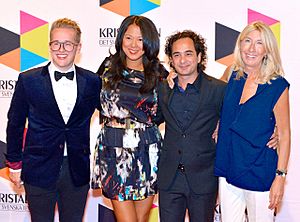 Sveriges mästerkock (Masterchef Sweden) was awarded the winner of Kristallen 2013 for the docusoap of the year. Markus Aujalay (chef, judge) and Lena Styren (producer) at the right.

Nils Markus Aujalay (born 30 April 1971, in Uppsala) is a Swedish chef who participates in several cooking shows on Swedish TV4 (Sweden). He was awarded Chef of the Year in 2004.

Markus Aujalay has a Burmese father and a Swedish mother. His grandfather was born in Punjab, northern India, and emigrated to Burma when he was 17 years old. Once there, he had a son who moved to England and met Markus' mother.

Aujalays first work as a chef was at Arlandia hotel a few years after senior high school. He then got an employment at Operakällaren. Aujalay has since worked in restaurant Fredsgatan 12 and runs the restaurant service in Winterviken in Stockholm, Fjällpuben in Åre and participates in the jury of the TV show Sveriges mästerkock (Masterchef Sweden) and Sveriges yngsta mästerkock (Masterchef Junior Sweden) on TV4 (Sweden).

In 2000, Aujalay was awarded Årets gröna kock and Årets viltkock. In 2004 he was awarded Chef of the Year.

He also has his own wines, red and rose, "Signature by Markus Aujalay".

All content from Kiddle encyclopedia articles (including the article images and facts) can be freely used under Attribution-ShareAlike license, unless stated otherwise. Cite this article:
Markus Aujalay Facts for Kids. Kiddle Encyclopedia.