Marsden Point lies 30 kilometres (19 mi) southeast of Whangarei and around 140 kilometres (87 mi) from Auckland's CBD. It forms the south-eastern tip of the entrance to the Whangarei Harbour on the east coast of Northland, New Zealand.

The Greater Marsden Point Area extends from One Tree Point within the Whangarei Harbour, to just south of the Ruakaka township on the coast, a total land area of some 2,500 hectares.

The area is recognised for being home to two significant assets of New Zealand infrastructure – Northport, a purpose built cargo port, and Refining NZ, the country’s only oil refinery.

The Greater Marsden Point Area is distinctive for its Pacific coastline, where Bream Bay extends for 22 kilometres of white-sand beach. The Bay includes native reserve islands - the Hen and Chicken Islands and Sail Rock. West of Marsden Point, the area extends into the sheltered waters of Whangarei Harbour.

In comparison with the wider Whangarei District environment, the lands of the Greater Marsden Point Area are unusually flat and open terrain, in stark contrast to the towering tree-covered cliffs of Mount Manaia, which rise 403 metres above sea level just across the Harbour on the northern entrance. Easy access to beaches and recreational fishing grounds, with a climate of warm summers and mild winters, make the area a popular holiday spot and residential location. 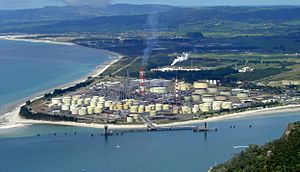 The refinery at Marsden Point

At the 2013 census, the Marsden Point-Ruakaka Census Area Unit was home to approximately 3,600 people, with the majority living in one of three residential settlements:

The tangata whenua – the people of the land -are the Patuharakeke hapu whose rohe - area – stretches on the seaward side from a point at the north of Mangawhai Heads to the entrance of the Mangapai River just south of Whangarei.

The population swells over summer months with visitors who either own holiday homes or stay at one of several motels and camping grounds in the area.

According to the 2013 census, there were 1,450 paid employees within the following industries:

All content from Kiddle encyclopedia articles (including the article images and facts) can be freely used under Attribution-ShareAlike license, unless stated otherwise. Cite this article:
Marsden Point Facts for Kids. Kiddle Encyclopedia.