Marshfield is a small unincorporated community in Steuben Township, Warren County, in the U.S. state of Indiana.

The town of Marshfield was platted on May 22, 1857, and named for Marshfield, Massachusetts, the home of statesman Daniel Webster. A post office was established on April 6, 1857, which operated until 1989. In 1870, the population was 150 and, by 1900, it had grown to 250. In the late 1800s, the town had a dry goods store, a hotel, three churches, three saloons, two blacksmith shops, a grain warehouse, a wagon and carriage manufactory, a grocery store, a drug store and three physicians.

In 2007, Marshfield consisted of a number of private residences, a grain elevator, a church and a body shop.

Aerial view looking to the southwest

Marshfield is located in open farmland on County Road 450 South, about 1.75 miles (2.82 km) west of State Road 63, at an elevation of 699 feet (213 m). Chesapeake Creek begins just east of town, and an early village named Chesapeake once stood about 2 miles (3.2 km) to the east. A Norfolk Southern Railway line runs along the east side of town, from Danville, Illinois, in the southwest to Lafayette in the northeast; the line carries about 45 freight trains per day. 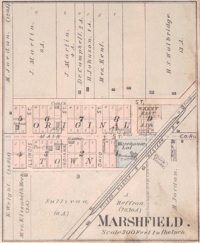 All content from Kiddle encyclopedia articles (including the article images and facts) can be freely used under Attribution-ShareAlike license, unless stated otherwise. Cite this article:
Marshfield, Indiana Facts for Kids. Kiddle Encyclopedia.