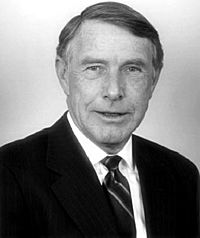 Martin Olav Sabo (February 28, 1938 – March 13, 2016) was an American politician. He was a member of the Democratic-Farmer-Labor Party (DFL). He served as a United States Representative for Minnesota's fifth district, which includes Minneapolis. He served as a representative from 1979 through 2007.

All content from Kiddle encyclopedia articles (including the article images and facts) can be freely used under Attribution-ShareAlike license, unless stated otherwise. Cite this article:
Martin Olav Sabo Facts for Kids. Kiddle Encyclopedia.