Keith Maurice Ellison (born August 4, 1963) is an American politician and lawyer who is the 30th and current Attorney General of Minnesota. Ellison was the U.S. Representative for MN's 5th congressional district from 2007 to 2019. He also served as the titular Deputy Chair of the Democratic National Committee from 2017 to 2018.

He is a member of the Democratic–Farmer–Labor Party (DFL), the Minnesota state Democratic Party affiliate. His previous district centered on Minneapolis and the surrounding suburbs. He was a vice-chair of the Congressional Progressive Caucus and a Chief Deputy Whip, and also served on the House Committee on Financial Services.

In November 2016, progressive groups and United States senators, including Bernie Sanders of Vermont, supported Ellison for chair of the Democratic National Committee. On February 25, 2017, minutes after defeating him on the second ballot, newly elected Chairman Tom Perez moved for Ellison to be elected his Deputy Chair, which was approved by a unanimous voice vote of DNC members. On November 8, 2018, Ellison resigned as Deputy Chair.

On June 5, 2018, Ellison announced that he would not seek reelection to a seventh term in Congress in 2018, but would instead run for Minnesota Attorney General. On August 14, Ellison won the Minnesota Democratic primary. On November 6, he was elected Attorney General, defeating Republican Doug Wardlow and becoming the first African American elected to statewide office in Minnesota, as well as the first Muslim to win election to any statewide office. 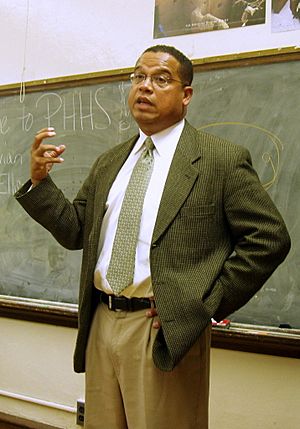 Ellison during the 2006 campaign

Keith Ellison, the third of five sons, was raised Catholic in Detroit, Michigan. Ellison and three of his brothers became lawyers; his other brother became a doctor. One of Ellison's brothers is also the pastor of the Baptist "Church of the New Covenant" in Detroit. Ellison's youth was influenced by the involvement of his family in the Civil Rights Movement, including his grandfather's work as a member of the NAACP in Louisiana.

Ellison graduated in 1981 from the University of Detroit Jesuit High School and Academy, where he was active in sports and a senator in the student government. At the age of 19, while attending Wayne State University in Detroit, Ellison converted from Catholicism to Islam.

After graduating with a Bachelor of Arts in economics in 1987, Ellison married his high school sweetheart and moved to Minneapolis to attend the University of Minnesota Law School. While there, he wrote several articles in support of Louis Farrakhan of the Nation of Islam. Ellison graduated with a Juris Doctor in 1990.

After law school, Ellison worked for three years as a litigator specializing in civil rights, employment, and criminal defense law. Ellison then became executive director of the nonprofit Legal Rights Center in Minneapolis, which specializes in the defense of indigent clients. Upon leaving the Legal Rights Center, Ellison entered private practice specializing in trial practice.

Ellison has also been regularly involved in community service. He served as the unpaid host of a public affairs talk program at KMOJ radio, and has also often volunteered as a track coach for several organizations, working with youth between the ages of five and 18.

All content from Kiddle encyclopedia articles (including the article images and facts) can be freely used under Attribution-ShareAlike license, unless stated otherwise. Cite this article:
Keith Ellison Facts for Kids. Kiddle Encyclopedia.