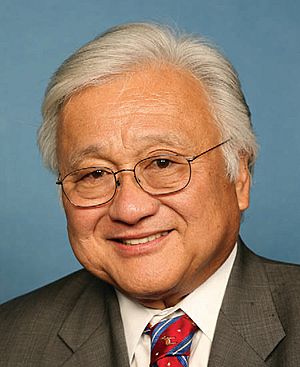 Michael Makoto Honda (born June 27, 1941), also known as Mike Honda, is an American politician. He was the U.S. Representative for the 17th District of California until 2017 when he lost to Democrat Ro Khanna.

Honda was born in Walnut Grove, California in 1941. He is the son of Japanese American parents. He calls himself Sansei, which means that he is the grandson of people born in Japan who immigrated to the US.

All content from Kiddle encyclopedia articles (including the article images and facts) can be freely used under Attribution-ShareAlike license, unless stated otherwise. Cite this article:
Mike Honda Facts for Kids. Kiddle Encyclopedia.