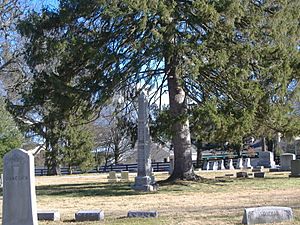 The Martyrs Monument in Midway, located in Midway City Cemetery outside Midway, Kentucky, was placed on the National Register of Historic Places on July 17, 1997, as part of the Civil War Monuments of Kentucky Multiple Property Submission. It honors four Confederate prisoners who were killed due to the standing order of Union General over Kentucky Stephen G. Burbridge, known as Order No. 59, which declared: "Whenever an unarmed Union citizen is murdered, four guerrillas will be selected from the prison and publicly shot to death at the most convenient place near the scene of the outrages." The Confederate prisoners, whose names were M. Jackson, J. Jackson, C. Rissinger, and N. Adams, were executed on November 5, 1864 northeast of Midway, the precise location of which is unknown. This was due to the actions of Sue Mundy, a former trooper under John Hunt Morgan who terrorized Union forces in Kentucky during the later years of the American Civil War. They were buried in shallow graves originally, then re-buried in a Presbyterian cemetery, and finally in 1890 moved to their current location, with the dedication of the Martyrs Monument.

All content from Kiddle encyclopedia articles (including the article images and facts) can be freely used under Attribution-ShareAlike license, unless stated otherwise. Cite this article:
Martyrs Monument in Midway Facts for Kids. Kiddle Encyclopedia.