The name Marven Gardens is a portmanteau derived from Margate City and Ventnor City, because it lies on the border of Margate City and Ventnor City. Marven Gardens is surrounded by Ventnor Avenue, Winchester Avenue, Fredericksburg Avenue and Brunswick Avenue. The streets within it are Circle Drive, East Drive and West Drive, and signs at the end of each of these streets pay homage to its Monopoly heritage, with 'Marven Gardens' on a yellow background, and replicas of the house playing pieces adorn the posts on each sign. Most of the homes were built in the 1920s and 1930s.

For many years, houses in the neighborhood fell into disrepair. During the housing boom of the 2000s, many houses changed ownership and have been returned to their former beauty. Some of the homes have been raised to flood heights as well. In the past ten years, a group of residents used grant money from the City of Margate to restore the numerous landscaped garden areas throughout the development by planting hundreds of rose bushes, junipers and hydrangeas. Marven Gardens is one of the most expensive areas in Margate. It has some of the highest price per square foot rates in New Jersey. 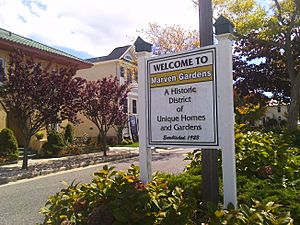 Marven Gardens is famous as a yellow property on the original version of the Monopoly game board, although the game misspelled the name as Marvin Gardens. The misspelling was introduced by Charles and Olive Todd, who taught the game to Charles Darrow, its eventual patentee. His homemade Monopoly board was copied by Parker Brothers. In 1995, Parker Brothers acknowledged this mistake and formally apologized to the residents of Marven Gardens for the misspelling. It is the only property on the board that is not located within Atlantic City.

All content from Kiddle encyclopedia articles (including the article images and facts) can be freely used under Attribution-ShareAlike license, unless stated otherwise. Cite this article:
Marven Gardens Facts for Kids. Kiddle Encyclopedia.