Mary Myers (born Mary Breed Hawley; 1849–1932) was a professional balloonist and aeronautical inventor, better known as "Carlotta, the Lady Aeronaut." She was the first American woman to fly her own lighter-than-air passenger balloon solo and set several records for balloon flights.

Myers ran a business of manufacturing and selling passenger airship balloons and high altitude weather balloons with her husband, Carl Myers. The couple obtained several patents on aerial navigation devices and promoted these through exhibition demonstrations at county fairs and town shows. They built their balloons and related equipment at their "balloon farm" in Frankfort, New York. Myers

By the time Myers retired from flying passengers in 1891, she had made hundreds of ascents and carried more than 100,000 passengers up in her balloons. She continued conducting test flights after her retirement. 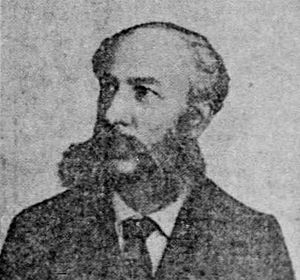 She married Carl Edgar Myers on November 8, 1871, in Hornellsville, New York. They started their married life in Mohawk, New York. They had one child, a daughter by the name of Elizabeth "Bessie" Aerial.

Myers' husband was a scientist and an aeronautical engineer. He was born in 1842 at Fort Herkimer, New York. He was at one time or another a banker, carpenter, chemist, electrician, mechanic, photographer, plumber, printer, and writer. At about the age of 40, Carl devoted his full attention to aeronautical engineering and designing passenger balloon airships.

Myers' husband had schooling from a scientist and developed an interest in what was known at the time as "aerial navigation": piloted flight by a person in a large balloon with a gondola basket hanging underneath. Myers and her husband invented new or improved systems for producing lighter-than-air gases and constructed hydrogen balloons that were controllable "airships". Their airships included an aërial velocipede sky-cycle, which Myers flew often, and gas weather balloons for the U.S. government.

Myers and her husband patented a fabric for holding hydrogen gas in a large outdoor balloon, and from this they became designers of floating passenger balloons. At first they hired experienced aeronaut test pilots to fly their new designs of balloon assemblies. When they couldn't get a test pilot to fly a new design, they did the flying themselves. Myers was also an assistant lab technician and the business secretary-bookkeeper. 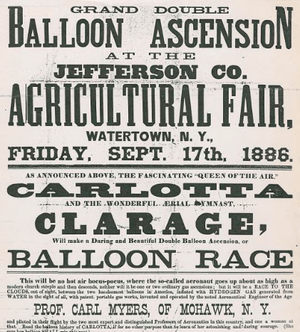 Myers developed an interest in wanting to become a test pilot aeronaut herself after watching her husband fly successfully. She decided not to use her plain real name of "Mary" for her flying performances and instead took on the more romantic, exotic stage name of "Carlotta." It is uncertain who picked the derivative of her husband's name, but it seems that her husband Carl had some influence. She ultimately became known professionally as "Carlotta, the Lady Aeronaut," "Carlotta Myers-Lady Aeronaut," and "Carlotta / Mrs. Carl Myers."

The first solo flight that Myers completed was from Little Falls, New York, on July 4, 1880. It was done in sight of 15,000 spectators. At about five o'clock in the afternoon, she stepped into the balloon's gondola basket. She wore a blue flannel suit and a sailor's hat, all of which gave her a boyish appearance. Her lift off was synced with a carrier pigeon that was thrown out of the balloon when the ground crew released the gondola basket. The pigeon carried a message to her friends and neighbors in Mohawk, New York to inform them that her balloon ascent had just started. She rode for about a half-hour some 20 miles to the town of Stratford, New York, landing safely in a farmer's field. After she packed up her balloon, the farmer's son gave her a ride back to Little Falls, and she then took a train back to Mohawk. Myers was subsequently hired to take tourists on balloon rides in Saratoga Springs, New York and throughout upstate New York.

Myers controlled flight direction by the use of barometer and altitude readings. She used recordings of previous flights to know at which altitude she would encounter certain air currents. She then used these particular air currents for navigation. Myers would go higher or lower by operating valves that controlled the hydrogen gas and by adjusting sandbag weights. She then navigated to the desired air current which would take her to her destination. Her balloon airship was also steerable by the shifting of her weight and by fin rudder apparatuses exposed to the air currents.

Not all of her flights were safely accomplished. The demonstration event at the Chenango county fairgrounds at Norwich, New York, on September 9, 1880, went smoothly at first: Myers' balloon, named "Aerial", ascended quickly upon liftoff. When it had obtained several thousand feet in altitude, however, she encountered rain. The accumulation of water in her open gondola caused extra weight and her balloon started dropping fast. She threw her ballast sandbags overboard, but despite this the balloon gondola began dragging on the treetops and eventually landed on the top of a basswood tree – eighty feet off the ground. After being stuck there for over an hour in pouring rain, Myers was rescued by a group of hunters who obtained a long ladder from a nearby farmer.

In another incident, Myers – who had already flown 179 times – ascended in a balloon called the "Flying Cloud" on July 2, 1883. 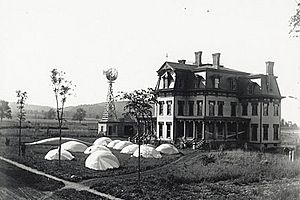 In 1889 Myers and her husband set up a successful business of making and selling hydrogen balloons from their five-acre farm in Frankfort, New York. The property came with a three-story Victorian style house with 30 rooms. The house had been previously constructed and owned by a businessman associated with the Diamond Match Company, with the mansion being built in 1878. After Myers' husband had purchased the property, he converted a portion of the house into shop facilities for manufacturing lighter-than-air passenger balloons.

The house shop facilities had a sewing room to make balloon fabric, a chemical lab for the varnishes needed to seal the fabric, basement equipment for making lighter-than-air hydrogen gas, a printing press for advertising, a carpentry shop for the gondola baskets, and a machine shop for metal parts. Their half-inflated balloons on the property where the fabric was being processed looked like giant mushrooms and gave the impression that they were growing balloons on their farm as an unusual agricultural crop, hence the name "balloon farm."

Myers and her husband not only designed and made passenger balloon airships, but also constructed built-to-order balloons. One of their customers was the United States Weather Bureau, which ordered scientific balloons to assist with weather forecasting. They constructed a made-to-order balloon for government rain-making experiments, and also military balloon equipment for the United States Army Signal Corps that was used in the Spanish–American War. Myers had a flight school at their farm home for flying lessons on passenger balloons. She performed many aerial demonstrations nationwide as a successful business. Myers and her husband's typical schedule was to arrive at a place around noon to unpack their equipment and set up. Once at the venue, they produced the hydrogen gas needed to inflate the balloon. They orchestrated everything necessary to manage a flight demonstration and afterwards packed up the balloon and equipment, clearing the town area for any subsequent events (e.g. dancing or bands).

Myers did hundreds of out-of-town balloon demonstrations from 1880 to 1891, bringing in large audiences and huge crowds wherever she went. Over the course of her career she carried over a hundred thousand passengers aloft in a balloon, mostly on tethered short rides. One common exhibition she did throughout Pennsylvania was on Fourth of July Independence Day celebrations. Myers even did parachute jumps out of these high altitude balloons, which made her "Carlotta, the most daring lady aeronaut in the world." 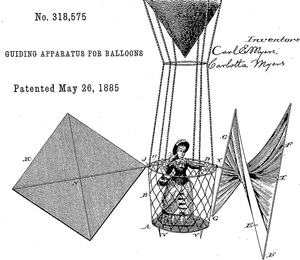 Myers contributed to her husband's inventions with her own navigational mechanisms. The Louisiana Democrat newspaper reported on July 11, 1885, that Myers had obtained several patents pertaining to passenger balloons. Some in particular were described as guiding and steering apparatuses for passenger balloons. These were rudder and steering devices consisting of collapsible parts that could be opened and exposed to the air currents for navigation. Myers used her inventions in over 150 of her flights.

The passenger gondola platform was described as made of expandable hammock netting surrounding the passenger. Myers described the navigation and steering capabilities of the airship as being achieved through the shortening and lengthening of the gondola hammock netting mesh, with a cloth screw propeller that would push her along like a boat propeller.

Another of the steering devices was described as a 5-foot hoop connected to the back of the balloon platform by cords. The interaction of the guiding apparatus was described by Myers as that of a rudder on a light boat in water, where the balloon itself tipped and changed its plane level side-to-side depending on the positioning of the hoop steering device. She described it as altering the aerodynamics of the balloon airship. Her passenger balloon airship could be further manipulated for navigation by stepping on the edges of the gondola platform and warping the edges.

Myers retired from flying passengers in 1891. She and her husband remained at the "Balloon Farm", where she continued test flying. In 1910 they sold the property and moved to Atlanta, Georgia to live with their daughter. Myers' husband died in 1925 at the age of 83 and she died in 1932.

All content from Kiddle encyclopedia articles (including the article images and facts) can be freely used under Attribution-ShareAlike license, unless stated otherwise. Cite this article:
Mary Myers Facts for Kids. Kiddle Encyclopedia.