Province of Massa-Carrara facts for kids 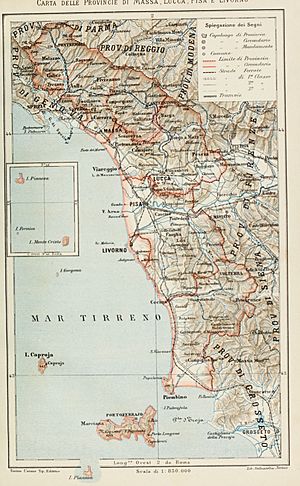 Historical map of provinces of Massa, Lucca, Pisa and Livorno (1896)

The Province of Massa-Carrara (Italian: Provincia di Massa-Carrara) is a province in the Tuscany region of Italy. It is named after the two main cities in its territory: Carrara and Massa, its capital.

The economy of the province is based on the production of the famous white Carrara marble.

All content from Kiddle encyclopedia articles (including the article images and facts) can be freely used under Attribution-ShareAlike license, unless stated otherwise. Cite this article:
Province of Massa-Carrara Facts for Kids. Kiddle Encyclopedia.