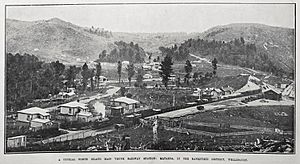 Construction by the Public Works Department (PWD) was well advanced by 1903. By March 1905 a station yard was being formed and by April 1906 it was the railhead, with a pumice road running north as far as Makatote. As well as the tunnels (see below), the line from Taihape included a 70 ft (21 m) cutting. North of Mataroa, PWD trains ran to Rangataua by July 1907 and to Ohakune by January 1908.

PWD transferred the station to NZ Railways (NZR) on 1 June 1907, when the line was opened by the local MP, Arthur Remington, after which Mataroa had 3 mixed trains a day. Before that, passengers had been carried on ballast trains, or passenger trains during 1906-7 Christmas and New Year holidays, goods had been carried from 11 September 1905 and regular freight began on 18 May 1906. The line to Waiouru was transferred to NZR on 1 July 1908, so that passengers no longer had to change trains at Mataroa.

From December 1905 there was a telegraph line from Taihape, which was extended to Turangarere and Bennett's Siding in 1906.

As shown in the table and graph below, passenger numbers were highest when passengers had to change at the station, but then fell to an average of around 20 a day. However, cattle, sheep, wool and timber traffic was heavy. Of the stations between Hamilton and Marton, Mataroa ranked around 8th in importance in terms of the value of its goods traffic.

The railway follows the Hautapu River for most of the way from Utiku to Waiouru, but, south of Mataroa, the railway burrows under Motukawa to get more directly via the Namunui Stream valley, through a 660 yd (600 m) tunnel. Boring of the tunnel started in 1903, breakthrough was made in 1904, or possibly 1905, and it was completed in 1906. The tunnel was prepared for electrification in 1984.

All content from Kiddle encyclopedia articles (including the article images and facts) can be freely used under Attribution-ShareAlike license, unless stated otherwise. Cite this article:
Mataroa railway station Facts for Kids. Kiddle Encyclopedia.