Panorama of Matauri Bay. The Cavalli Islands are further to the left. 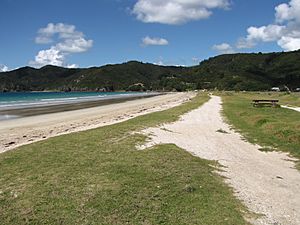 Matauri Bay is a bay in New Zealand, situated 30 km north of Kerikeri, in Whangaroa county, just north of the Bay of Islands. It has over a kilometre of beautiful white sand and crystal clear water. It is particularly popular in the summer when thousands flock there to stay in the local camping ground which can be seen at the left hand end of the beach in the photo (right).

Some of the first Polynesian navigators to New Zealand landed at Matauri Bay. It was a site of early Maori contact with Europeans, such as with the missionary Samuel Marsden in 1814.

Today Matauri Bay is popular with surfers, divers, fishers and those on holiday. The water is very clear and the fishing can be very good.

The Rainbow Warrior was given a final resting place near Matauri Bay, at the Cavalli Islands. It has become a living reef, attracting marine life and recreational divers.

The idea was first proposed by the New Zealand Underwater Association. It seemed a fitting end for a ship that had spent its time protecting the marine environment.

It was towed north with a patched hull on 2 December 1987. Ten days later, a crowd of well-wishers looked on as it was given a traditional Māori burial. Now home to a complex ecosystem, the Rainbow Warrior has become a popular dive destination. The local Māori community maintains its guardianship and conservation. In a few years, the Rainbow Warrior became an integral part of the environment it helped protect.

All content from Kiddle encyclopedia articles (including the article images and facts) can be freely used under Attribution-ShareAlike license, unless stated otherwise. Cite this article:
Matauri Bay Facts for Kids. Kiddle Encyclopedia.