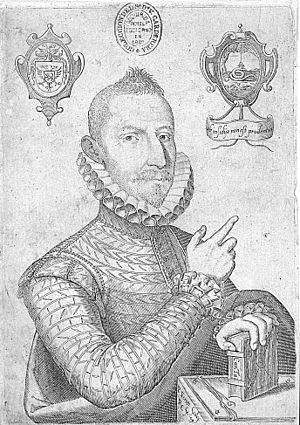 He graduated at Seville University in 1564 and later studied at Salamanca and Alcalá. From 1571 to 1588 held a post in the treasury. He was descended from Jews who were made to converted to Catholicism after 1492. One of his forebears had been burned by the Inquisition for secretly continuing to practice Judaism. In 1599, he published the first part of Guzmán de Alfarache. It was a well liked book which was printed in at least sixteen editions in five years.

In 1571 he married Catalina de Espinosa. It was not a happy marriage. He was constantly in money difficulties and was imprisoned for debt at Seville at the end of 1602.

In 1608, Alemán moved to America. It is said that he worked as a printer in Mexico. His Ortografía castellana (1609), published in Mexico, contains ideas for the reform of Spanish spelling. Nothing is known of Alemán after 1609, but it is sometimes believed that he was still living in 1617.

All content from Kiddle encyclopedia articles (including the article images and facts) can be freely used under Attribution-ShareAlike license, unless stated otherwise. Cite this article:
Mateo Alemán Facts for Kids. Kiddle Encyclopedia.