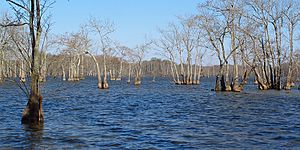 Neotropical migratory birds use the refuge during migration seasons throughout the year. The refuge supports about 200 species of migratory birds, including priority species such as the prothonotary warbler. This little cavity nester is a species of concern in other areas, but has plenty of habitat around the wooded waters of Mathews Brake.

Refuge staff manage the water level in the brake to promote moist-soil plants and to sustain oak trees around the edges for migratory birds. Other habitat types include 422 acres (1.71 km2) of bottomland hardwoods and 186 acres (0.75 km2) of young hardwood plantations. Hunting and fishing are the most popular programs on the refuge.

All content from Kiddle encyclopedia articles (including the article images and facts) can be freely used under Attribution-ShareAlike license, unless stated otherwise. Cite this article:
Mathews Brake National Wildlife Refuge Facts for Kids. Kiddle Encyclopedia.