The school opened as Flinders National Grammar School in January 1858.

The foundation stone for the school was laid on 5 December 1856 by Lieutenant Governor Major General Edward Macarthur. It is believed that the architect involved was local (German) architect Frank Kawerau, of Ryrie St Geelong whom also designed many government buildings across Victoria - including Wilsmere (formerly Kew Lunatic Asylum 1864 - which has very similar architecture). The school was to be named the Geelong National Grammar School, but the Governor said that should be named after Captain Matthew Flinders, the first European explorer to visit the You Yangs.

When the school opened in January 1858, 116 boys were enrolled, but there was no room for girls. Falling enrolments forced the school to become coeducational in 1864. The school was extended and remodelled in December 1879 due to increased student numbers. When the extensions were opened in April 1880, it was then known as Flinders State School no. 260. The school was unofficially known as 'Link's School', after fifth headmaster George Link who was in charge from 1879 to 1894. During this time enrolments had increased to 1000 students.

By 1938 enrolments were still increasing but there was not enough space. As a result, the decision was made in 1939 for it to become "Matthew Flinders Girls School" under Ada Knowles. The school was led by Frances Higgins from 1942 to 1947. In 1948 it was said to be "dilapidated" and "a dumping ground" for girls who would work in the mills as sonn as they were fourteen. At this point the school appointed Minnie Elizabeth Cawthorn as the new head. She decided that the students should not be trained for housewives but to have a life. The school became the "Matthew Flinders Girls School" and the grounds were pristine. In 1950 the first students to sit the "Girls' Leaving Certificate" in Victoria were at this school. In 1956 the new head of the school was Mary Lazarus.

through study and enterprise.

or whether outside at sport.

and try as we know we ought.

The teachers that we knew,

the worthwhile and true

As we sing with joy today!

Be ours while time shall last.

the worthwhile and true.

or whether outside at sport

and try as we know we ought.

As we sing with joy today! 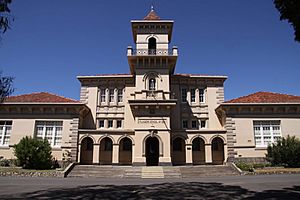 Main building of the school

The college operates on two campuses. Years 7, 10, 11 and 12 students are located on the Main Campus, whilst Years 8 and 9 are on the smaller Helen Fraser Campus.

All content from Kiddle encyclopedia articles (including the article images and facts) can be freely used under Attribution-ShareAlike license, unless stated otherwise. Cite this article:
Matthew Flinders Girls Secondary College Facts for Kids. Kiddle Encyclopedia.