You Yangs facts for kids

The You Yangs are a series of granite ridges that rise to 319m (Flinders Peak) above the Werribee Plain approximately 55 km south-west of Melbourne and 22 km north-east of Geelong, in Victoria, Australia. The main ridge runs roughly north–south for about 9 km, with a lower extension running for about 15 km to the west. Much of the southern parts of the ranges are protected by the You Yangs Regional Park.

Although only 319 m at their highest, they dominate the landscape and are clearly identifiable from nearby Geelong, Melbourne and beyond. Camping is not permitted in the You Yangs. The foothills to the north of the peaks are home to Ford Australia's proving ground.

The You Yangs are home to a geoglyph of Bunjil, a Dreamtime creator deity to some of the Indigenous people of Victoria, depicted as an wedge-tailed eagle. The geoglyph was constructed by the Australian artist Andrew Rogers in recognition of the local Indigenous Wathaurong people. Unveiled in March 2006, the geoglyph has a wing span of 100 metres and 1500 tonnes of rock was used in its construction.

The name "You Yang" comes from the Aboriginal words Wurdi Youang or Ude Youang which could have any number of meanings from "big mountain in the middle of a plain", "big or large hill", or "bald". The Woiwurrung word for granite stone 'yow.wong' is also a possibility. The Yawangi people enlarged natural hollows in the rocks to form wells that held water even in dry seasons. The area around the You Yangs was called Morong-morongoo after the murnong that was abundant there in the past.

Explorer Matthew Flinders was the first European to visit the You Yangs. On 1 May 1802, he and three of his men climbed to the highest point. He named it "Station Peak" but the name was changed in 1912 to "Flinders Peak" in his honour.

The You Yangs have always attracted artists to paint them and feature most strongly in works by one of Australia's greatest artists, Fred Williams. Williams spent long periods developing his plein air representations of the You Yangs, and these have now become classics of Australian art — rugged, dramatic, yet sparse in their imagery — unquestionably of the Australian bush.

The You Yangs were chosen to depict some battle scenes for the HBO WW2 production - The Pacific (miniseries).

The nearest settlements include;

Two watercourses pass through or by the ranges: Hovells Creek originates in the western parts of the ranges, while Little River flows around the ranges to the north and east. 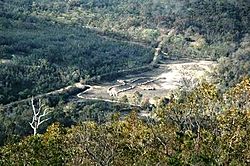 View of the Bunjil geoglyph from Flinders Peak

Contrary to popular belief, the You Yangs are not the remains of a volcano. They are an inselberg or monadnock, and the granite that forms them was originally a mass of magma that had worked its way up into the surrounding sedimentary rocks during the Devonian period, when the land surface in Victoria was several kilometres higher than today.

The magma crystallised before it reached the surface, so it did not produce any volcanic activity. Instead, a very slow cooling rate allowed many large white crystals of feldspar to form. These can be seen in many of the granite outcrops throughout the ranges. In places the crystals appear to be lined up, probably because the gooey magma was still moving around when they were growing. The rock enclosing the big feldspar crystals mainly contains crystals of greyish quartz and two black minerals (hornblende and a variety of mica known as biotite).

There are also some tiny crystals of two minerals, allanite and titanite, that contain radioactive elements such as uranium and thorium. Titanite crystals have been used to calculate that the You Yangs granite solidified 365 million years ago. In many places in the granite there are dark grey clots and lumps. These are called xenoliths and are foreign pieces of sedimentary rock that have been incorporated into the magma as it moved to the location at which it solidified. 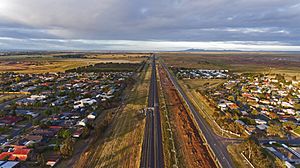 The You Yangs as seen from Werribee Racecourse. Taken 2017.

The land surface has eroded over the millions of years since the granite solidified, leaving it exposed. Because granite is a hard rock, it has resisted erosion better than the rocks that surrounded it. The size and shape of the rounded tors are controlled by fractures in the granite that resulted from slight shrinkage during cooling. Weathering and erosion of the granite has formed a blanket of sandy soil that covers any contacts with surrounding rocks.

Owing to the rain shadow created by the Otway Ranges to the south west, the You Yangs are in the driest part of Victoria south of the Great Dividing Range. Annual rainfall is as little as 450 millimetres (18 in), with the result that the vegetation is grassland or low woodland rather than forest.

Many introduced plants occur in the You Yangs, some planted deliberately for forestry, including sugar gum (E. cladocalyx), swamp yate (E. occidentalis) and brown mallet (E. astringens), and others that have been introduced accidentally or have invaded the area, for example, boneseed (Chyrsanthemoides monilifera) and bridal creeper (Asparagus asparagoides).

Koalas in the You Yangs have been studied since 2006. In approximately 28% of the Park they are monitored by a non-intrusive system of nose pattern identification. The entire population was considered to number around 105 in 2017, down 35% from estimated 161 in 2007. The population has been recorded to prefer to roost in river red gum (Eucalyptus camaldulensis): 34% of sightings occur in that species. Four generations of one koala family have been recorded.

The nearby Serendip Sanctuary, a Victorian government wildlife research centre, open to the public, has been involved in breeding endangered Victorian wildlife species, such as the Australian bustard and the brolga (Antigone rubicundus).

All content from Kiddle encyclopedia articles (including the article images and facts) can be freely used under Attribution-ShareAlike license, unless stated otherwise. Cite this article:
You Yangs Facts for Kids. Kiddle Encyclopedia.