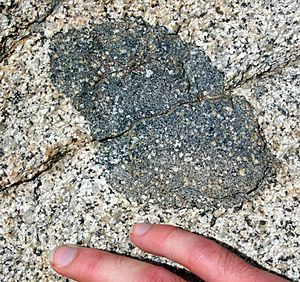 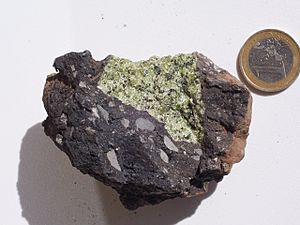 Peridotite (green) mantle xenolith in a (dark) volcanic bomb from the Vulkan-Eifel, Germany. One euro coin for scale

A xenolith (foreign rock) is a rock fragment which another rock surrounds.

It happens most in igneous rock when magma is fluid enough to flow round more solid rock. Xenoliths may be covered in the margins of a magma chamber, torn loose from the walls of a flow of lava or picked up along the ground by flowing lava on Earth's surface. A xenocryst is an individual foreign crystal included within an igneous body. Examples of xenocrysts are quartz crystals in a low-silica lava and diamonds in kimberlite diatremes.

Although the term xenolith is most commonly associated with igneous inclusions, a broad definition could include rock fragments which have become encased in sedimentary rock. Xenoliths are sometimes found in meteorites.

Xenoliths and xenocrysts provide important information about the composition of the otherwise inaccessible mantle. Basalts, kimberlites, lamproites and lamprophyres, which have their source in the upper mantle, often contain fragments and crystals assumed to be a part of the lower mantle mineralogy. 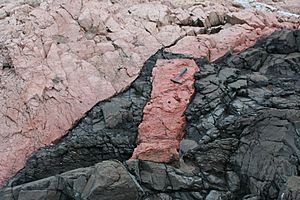 All content from Kiddle encyclopedia articles (including the article images and facts) can be freely used under Attribution-ShareAlike license, unless stated otherwise. Cite this article:
Xenolith Facts for Kids. Kiddle Encyclopedia.