Mawson's Huts are the collection of buildings located at Cape Denison, Commonwealth Bay, in the far eastern sector of the Australian Antarctic Territory, some 3000 km south of Hobart. The buildings were erected and occupied by the Australasian Antarctic Expedition (AAE) of 1911-1914, led by geologist and explorer Sir Douglas Mawson.

Mawson's Huts are rare as one of just six surviving sites from the Heroic Era of Antarctic exploration. The Australasian Antarctic Expedition was the only Heroic Era expedition organised, manned and supported primarily by Australians.

The huts included a magnetograph hut, used to measure variations in the south magnetic pole; an absolute magnetic hut, which was used as a reference point for studies in the magnetograph hut; and the transit hut, an astronomical observatory.

The most important building at the site is the winter living quarters, known as "Mawson's Hut". This pyramid-roofed hut was home to the eighteen men of the AAE main base party in 1912, and the seven (including Douglas Mawson) who stayed on for an unplanned second year in 1913. The hut combines two sections - the living quarters and the workshop, prefabricated in Sydney and Melbourne respectively, and shipped to the site for construction in 1912 by the AAE team.

Using a wireless relay station on Macquarie Island, it was possible to contact the Australian mainland by radio. The AAE was the first expedition that had this possibility. Meteorological observations got transmitted by the system continuously. It was the first use of radio on the Antarctic continent.

The main hut contains a kitchen, a laundry, a storage and a sleeping room. 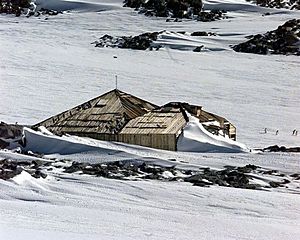 View of Mawson's Huts in February 2006, a year after the site was designated an Australian National Heritage Site.

Expeditions undertaken by the Australian government (through the Australian Antarctic Division since the late 1970s) and private non-profit conservation organisations (notably the two Project Blizzard expeditions of 1984/85 and 1985/86, and the Mawson's Huts Foundation since 1997) have carried out conservation research, surveys and work on the huts. In addition to archaeological recording, removal of snow from inside the huts and ongoing maintenance, recent interventions (1998 and 2006) have been to encapsulate the failing timber roofs with new timber over-cladding in order to weatherproof the interiors.

The Australian Antarctic Division and the Australian Minister for the Environment & Water Resources released for public comment a new management plan for the Mawson's Huts Historic Site in July 2007. The plan set out the principles that guided activities to preserve the heritage values of the site in the lead-up to the centenary of the Australasian Antarctic Expedition.

All content from Kiddle encyclopedia articles (including the article images and facts) can be freely used under Attribution-ShareAlike license, unless stated otherwise. Cite this article:
Mawson's Huts Facts for Kids. Kiddle Encyclopedia.