McDermott's Castle is a castle and National Monument located in County Roscommon, Ireland.

McDermott's Castle is located on Castle Island, an island of 0.23 ha (0.57 ac) in the southeast corner of Lough Key.

The Mac Diarmada were the ruling dynasty of Magh Luirg (Moylurg; northeast Connacht) from the 10th to 16th centuries. A castle stood on this island from the 12th century: in 1184, the Annals of Loch Cé report that a lightning bolt caused a fire:

The Rock of Loch-Cé was burned by lightning, i.e. the
very magnificent, kingly residence of the descendents of Máel Ruanaid
where neither goods nor people of all that were
there found protection; where six score, or seven score, of
distinguished persons were destroyed, along with fifteen
men of the race of kings and chieftains, with the wife of
Mac Diarmada, i.e. the daughter of Ó hEidhin, and his
son's wife, i.e. the daughter of Domhnall O'Conchobhair,
and the daughter of Ó Dubhda, and the son of Donnchadh
O'Maelbhrenuinn, and the son of Donn O'Mannachain,
and the two daughters of O'Mannachain, and Mac Maenaigh,
chieftain of Cenél-Builg, and the priest O'Maelbealtaine,
and Gillachiarain Ó Connachtain, (i.e. a son of
chastity and lamp of piety), and a countless destruction
besides of good men; and every one of them who was not
burned was drowned in this tumultuous consternation,
in the entrance of the place; so that there escaped not
alive therefrom but Conchobar mac Diarmata with a
very small number of the multitude of his people.

A rebuilt castle featured in the final part of the 1235 conquest of Connacht by Richard Mór de Burgh, 1st Baron of Connaught. The castle came under siege, first by a raft-mounted catapult, and then by fire ships. Cormac MacDermott, King of Moylurg, was forced to surrender.

A poem addressed to Tomaltach an Einigh mac Diarmata (King of Moylurg 1421–58) tells the story of the Hag of Lough Key who used (or abused) Cormac MacDermott's (king 1218–44) hospitality by staying on the Rock for a full year, and laid upon the McDermotts the obligation of perpetual hospitality.

The McDermotts lost the island in 1586. Eochaidh Ó hÉoghusa wrote a poem lamenting the castle's emptiness.

In 2014, the island and castle featured in an episode of sitcom Moone Boy, as the residence of the mysterious "Island Joe."

In 2018, the castle was put up for sale for €80,000. However, the offer was later withdrawn and the castle returned to Irish ownership.

In 2016, licensed excavations were undertaken at the nearby Rockingham moated site, suggested (by some interpretations of the Annals of Connacht) to be the remains of a medieval market. This site may have been the landward element of the fortified Rock of Lough Key. The excavation exposed a large enclosure around the moated site dating to the thirteenth century which covered an early medieval ringfort ditch. A large grain drying kiln of indeterminate date was found associated with the moated site. Artifacts discovered on the site firmly placed the date of the moated site to the medieval period.

In 2019, Archaeological excavations were also undertaken on the island. The excavations concluded that the island itself is essentially a multi-period fortification, with the earliest elements dating to the early medieval era. An earlier, two to three meter thick enclosure wall pre-dating the standing enclosure wall was excavated at a depth of a meter and a half. Medieval buildings dating to the thirteenth century were excavated on the northern side of the island above the earlier fortification, but were not found to be connected to the standing enclosure wall. High-status Gaelic artifacts were discovered, including silver pins, a gaming piece, and large collections of butchered cattle, boar, and sheep. The research on the island was featured in Archaeology Magazine. 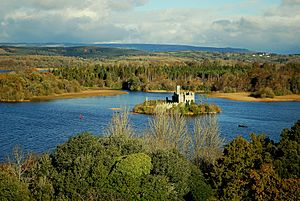 The standing remains on the island date from at least three distinct periods. The enclosure wall around the island are the earliest standing remains. O'Conor et al. argued that the enclosure wall is probably of medieval construction, but the wall has not been dated, and the excavations by Finan and Schryver were not able to connect the enclosure wall to their excavations. O'Conor et al. identified a late medieval tower house on the interior of main standing building. An arrow slot and medieval windows are found on the western wall of this tower house. The additions on either side of the tower, as well as the kitchen on the eastern side of the tower, were added by the architect John Nash in the early nineteenth century. At that time, windows were inserted into the later medieval tower house. The enclosure wall was modified on the northern end of the island in order to provide a view from the main window inserted into the tower. It was built as a summer house and burned down during the Second World War.

All content from Kiddle encyclopedia articles (including the article images and facts) can be freely used under Attribution-ShareAlike license, unless stated otherwise. Cite this article:
McDermott's Castle Facts for Kids. Kiddle Encyclopedia.