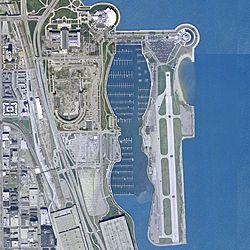 Meigs Field Airport from the air.

Merrill C. Meigs Field Airport (IATA: CGX, ICAO: KCGX), was a single strip airport that operated from December 1948 until March 2003. It was built on Northerly Island.

The airport opened on December 10, 1948, and became America's busiest single-strip airport in 1955. The air traffic tower was built in 1952 and the terminal was built in 1961. The airfield was named for Merrill C. Meigs, an aviation enthuisist.

The airport was a common sight on the Chicago lakefront. It was also known as the default airport in many versions of Microsoft Flight Simulator. It was featured in Microsoft's Midtown Madness and Reflections' Driver 2 video game. The airport is also the main location of the film Powers of Ten.

The Main Terminal was used by the Chicago Department of Aviation. The runway at Meigs Field was 3,900 by 150 ft (1,189 by 46 m). There were four helicopter pads at the south end of the runway.

All content from Kiddle encyclopedia articles (including the article images and facts) can be freely used under Attribution-ShareAlike license, unless stated otherwise. Cite this article:
Meigs Field Facts for Kids. Kiddle Encyclopedia.