Melaleuca cardiophylla, commonly known as tangling melaleuca or umbrella bush is a plant in the myrtle family, Myrtaceae and is endemic to the west and south-west of Western Australia. It is a dense, prickly shrub with heart-shaped leaves, stamens that are joined in unusually long claw-like bundles, and distinctive, warty fruits.

The flowers are arranged in groups of 1 to 5 along considerable lengths of the branches. The petals and sepals have edges that are almost transparent and the petals fall from the flower soon after it opens. The stamens are white or cream and arranged in five bundles around the flower, each bundle having the appearance of a claw. Flowering time is variable but is usually between August and January. The fruit are almost spherical, knobbly, woody capsules that are larger than those of most other melaleucas at about 10 mm (0.4 in) diameter. 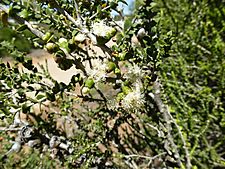 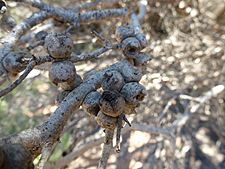 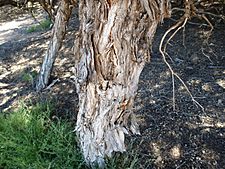 This melaleuca occurs in areas close to the coast between Perth, the Exmouth district and the Pilbara in the Carnarvon, Gascoyne, Geraldton Sandplains, Swan Coastal Plain and Yalgoo biogeographic regions. It grows in sand on limestone and sand dunes often in association with Eucalyptus species such as E. obtusiflora, E. oraria and E. zopherophloia.

Melaleuca cardiophylla is listed as "not threatened" by the Government of Western Australia Department of Parks and Wildlife.

All content from Kiddle encyclopedia articles (including the article images and facts) can be freely used under Attribution-ShareAlike license, unless stated otherwise. Cite this article:
Melaleuca cardiophylla Facts for Kids. Kiddle Encyclopedia.