Melaleuca incana subsp. incana, commonly known as grey honey-myrtle, is a plant in the myrtle family Myrtaceae which is endemic to the south-west of Western Australia and is naturalised in the south of Victoria in Australia. It is commonly grown as a garden plant and produces large numbers of white or creamy yellow flowers in early spring.

Melaleuca incana subsp. incana is a medium to tall shrub with weeping branches. It grows to a height of about 3 metres (10 ft) and has rough, grey bark. The leaves are in opposite pairs, sometimes rings of three, curved and crowded along the branchlets, 3.5–17 millimetres (0.1–0.7 in) long and 0.5–3.5 millimetres (0.02–0.1 in) wide, linear or very narrow elliptic in shape and tapering to a point. The leaves and young branches are covered with fine, soft hairs giving the foliage a grey appearance. 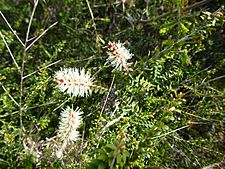 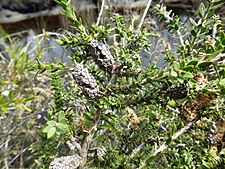 This species was first described in 1819 by Robert Brown in Edward's Botanical Register. Edwards called the plant "Grizzly Melaleuca" and noted that the plant was ...first observed by Mr. Brown, in King George the Third's Sound, on the south-west coast of New Holland. ... We were favoured with the specimen, for the drawing, by Lady Aylesford ... We are indebted to Mr. Brown for the specific characters, and all we know concerning the plant. The specific epithet (incana) "is from the Latin incanus, hoary, white, in reference to the colour of the leaves".

Melaleuca incana subsp. incana occurs between Albany and Jurien Bay and inland as far as the Dryandra woodland in the Avon Wheatbelt, Geraldton Sandplains, Jarrah Forest, Swan Coastal Plain and Warren biogeographic region. It is also naturalised in the Gippsland and Otway plains areas of Victoria.

Melaleuca incana subspecies incana is widely cultivated. It is a hardy plant, fast growing, tolerating a range of soils and conditions after initial establishment and is frost hardy. It is widely available in commercial nurseries and tolerates pruning to form a hedge. It is susceptible to scale insect attack.

All content from Kiddle encyclopedia articles (including the article images and facts) can be freely used under Attribution-ShareAlike license, unless stated otherwise. Cite this article:
Melaleuca incana subsp. incana Facts for Kids. Kiddle Encyclopedia.