Melaleuca interioris is a plant in the myrtle family, Myrtaceae and is endemic to Western Australia, South Australia, Queensland, New South Wales and the Northern Territory. It was formerly included in Melaleuca uncinata and is similar to that species with its cylinder-shaped leaves and small heads of yellow flowers, but with smaller, less compressed fruiting capsules.

The flowers are yellow and are arranged in heads which are composed of 4 to 9 groups of flowers in threes. The petals are 1.1–1.3 mm (0.04–0.05 in) long, circular to egg-shaped and fall off as the flower opens. There are five bundles of stamens around the flower, each with 4 to 9 stamens. Flowering occurs between August and November and is followed by fruit which are woody capsules, 3.8–8 mm (0.1–0.3 in) wide, about the same length as width. The capsules remain separate from each other (whereas in Melaleuca uncinata they tend to become compressed together so that they look like a single fruit). 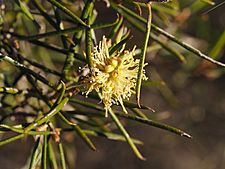 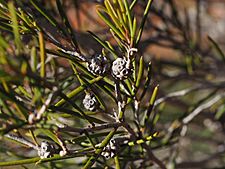 Melaleuca interioris was first formally described in 2004 by Lyndley Craven and Brendan Lepschi in Australian Systematic Botany from a specimen collected 134 kilometres (80 mi) north of Leinster in Western Australia. The specific epithet (interioris) refers to the interior of Australia, where this species is found.

Melaleuca interioris is listed as "not threatened" by the Government of Western Australia Department of Parks and Wildlife.

Melaleuca interioris and related species of melaleucas such as M. uncinata and M. atroviridis can be used to protect property from wind and water erosion, reduce salinity and waterlogging, provide wildlife habitat and provide income by harvesting for brushwood fencing.

All content from Kiddle encyclopedia articles (including the article images and facts) can be freely used under Attribution-ShareAlike license, unless stated otherwise. Cite this article:
Melaleuca interioris Facts for Kids. Kiddle Encyclopedia.