Melaleuca pyramidalis is a shrub growing to 3.5 m (10 ft) tall with compact, dark grey, papery bark. Its leaves are arranged alternately and are 29–84 mm (1–3 in) long, 8–24 mm (0.31–0.94 in) wide, flat, elliptical in shape with a short stalk. The veins are pinnate and there are only a few scattered, indistinct oil glands.

M. pyramidalis can be distinguished from the similar M. citrina by its obscure oil glands (prominent in M. citrina) and yellow stamen tips (dark red in M.citrina). 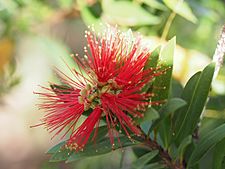 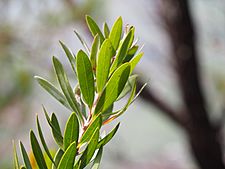 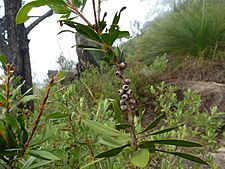 Callistemon pyramidalis is regarded as a synonym of Melaleuca pyramidalis by the Royal Botanic Gardens, Kew.

Melaleuca pyramidalis occurs on the summits of Walshs Pyramid, Mount Diamantina (on Hinchinbrook Island) and Mount Leach (near Ingham). It grows mostly in open forest on rocky hilltops.

The classification "Vulnerable" under the IUCN Red List applies to Melaleuca pyramidalis because it is only known from a few sites.

All content from Kiddle encyclopedia articles (including the article images and facts) can be freely used under Attribution-ShareAlike license, unless stated otherwise. Cite this article:
Melaleuca pyramidalis Facts for Kids. Kiddle Encyclopedia.