Melaleuca seriata is a shrub in the myrtle family, Myrtaceae, and is endemic to the south-west of Western Australia. In describing it, John Lindley wrote "Melaleuca seriata, parviceps, and trichophylla, are bushes, every twig of which is terminated by hemispherical heads of a brilliant pink." It is very similar to Melaleuca parviceps.

The flowers are arranged in heads on the ends of branches which continue to grow after flowering, or sometimes in the upper leaf axils. The heads are up to 20 mm (0.8 in) in diameter and contain between 3 and 7 groups of flowers in threes. The petals are 1.5–3 mm (0.06–0.1 in) long and fall off soon after the flowers open. The stamens, which give the flower its colour are a shade of pink, purple or mauve with yellow tips and are arranged in five bundles around the flower, each bundle containing 5 to 9 stamens. Flowering is mainly in spring but also at other times of the year. The fruit are woody capsules 2.5–4 mm (0.1–0.2 in) long. 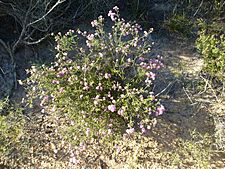 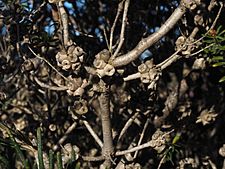 Melaleuca seriata was first formally described in 1839 by John Lindley in A Sketch of the Vegetation of the Swan River Colony. The specific epithet (seriata) is from the Latin word series, meaning "row", "succession" or "train" referring to the oil glands in the leaves which often occur in two rows.

This melaleuca occurs in and between the Coorow, Green Head, Perth, Bunbury, Wyalkatchem and Lake King districts in the Avon Wheatbelt, Geraldton Sandplains, Jarrah Forest, Mallee and Swan Coastal Plain biogeographic regions. It usually grows in sand over laterite or clay on sandplains and depressions which fill in winter.

Melaleuca seriata is classified as "not threatened" by the Government of Western Australia Department of Parks and Wildlife.

Melaleuca seriata has been successfully cultivated in well-drained soil in temperate areas with low humidity.

All content from Kiddle encyclopedia articles (including the article images and facts) can be freely used under Attribution-ShareAlike license, unless stated otherwise. Cite this article:
Melaleuca seriata Facts for Kids. Kiddle Encyclopedia.