Melbourne Central is a large shopping centre, office, and public transport hub in the city of Melbourne, Victoria, Australia. The complex includes the Melbourne Central Shopping Centre, which was refurbished in 2005 by architects Ashton Raggatt McDougall; the Melbourne Central railway station (a part of the City Loop underground railway and formerly called Museum); and the 211-metre (692 ft) high office tower with its distinctive black colour and two communications masts. The centre features a gross leasable area of 55,100 square metres (593,000 sq ft). It is owned by GPT Group.

Contained underneath the shopping centre's massive glass cone sits the Coop's Shot Tower which was built on the site in 1888. After last being used in 1961, the tower was retained to become a focal-point of the centre, R.M. Williams and the Shot Tower Museum now take up the inside of it. The tower was also featured in the opening sequence of the 1997 Jackie Chan film Mr. Nice Guy.

The Melbourne Central shopping and office development was designed by Japanese architect Kisho Kurokawa in the Metabolist style, and constructed between 1986 and 1991 by Japanese firm Kumagai Gumi at a cost of $1.2 billion. The original anchor tenant was the Japanese department store Daimaru, who opened their first Australian store over six floors located between the shot tower and La Trobe Street. (Daimaru also operated a second store on the Gold Coast in Queensland, which also no longer trades)

Large scale redevelopment of the city block bounded by Lonsdale, Swanston, La Trobe and Elizabeth Streets was studied in some detail during the 1960s and 1970s, being closely linked with work on the City Loop underground railway. Early work on the site commenced in 1971 when land on the south side of La Trobe Street was acquired, to enable the cut and cover construction of Museum Station (now known as Melbourne Central). With planning for the site being carried out by the Melbourne Underground Rail Loop Authority from 1980, the railway station opened in 1981, but protracted negotiations failed to find an anchor tenant for the development, resulting in the State Government of Victoria deciding in 1983 that a private developer should be sought.

By the time registrations closed in March 1984 a total of 28 submissions had been received from developers, with eight selected organisations invited to respond. A government panel sat in April 1985 to evaluate the responses, and one month later announced their preferred scheme: designed by Hassell Architects for EKG Developments, a joint venture between Australian property developer Essington Limited and Japanese construction firm Kumagai Gumi. The contract was signed soon after but without Essington Limited, who were removed by the State Government after a number of directors were linked to the Nugan Hand Bank. The project was also scaled back, with the hotel removed, and the office tower reduced to 72 storeys and then 55. It was also at this time that Kisho Kurokawa was brought on board as architect, with Hassell and Bates, Smart & McCutcheon compensated by becoming the joint documenters of the scheme. An anchor tenant was also found, Daimaru signed on due to the involvement of the Japanese Sumitomo Bank on the project.

Melbourne Central finally opened in 1991 but never became profitable for owner Kumagai Gumi, who sold 97.1 per cent to Australian property manager GPT Group for $408 million in 1999, retaining 2.9 per cent to write the asset off over 20 years. Kumugai abandoned this plan in 2001, selling their remaining share to GPT for $17 million. Daimaru closed their department store in 2002, paying five years' rent ($30 million) in return for abandoning their lease commitment which ended in 2016.

With half the total retail space empty due to the loss of Daimaru, GPT announced a $195 million plan to renovate the centre in April 2002. Eventually costing $260 million, the renovated centre with a postmodern design by architects Ashton Raggatt McDougall, aimed to open the complex to more natural light, new street-front shopping strips, and bubble-like additions to the footbridge across Little Lonsdale Street, but largely compromised the design of Kurokawa. The works also compromised access to the adjacent Melbourne Central railway station, removing direct access to Swanston Street and directing passengers through the shopping centre. The renovation took the book value of the complex to $1033 million in 2010, up from $229.8 million as of at 31 December 2001.

In 2010 plans for a second redevelopment were unveiled by GPT, being a $30 million stage one of a $75 million project. Again using Ashton Raggatt McDougall architects, the north-east corner at Swanston Street is again being altered, a new food precinct will be opened, and a new entry at Elizabeth Street built to create another cross-block connection through the precinct.

The Melbourne Central Office Tower comprises 57 levels, 46 of which are office floors. The tower is owned by GPT Wholesale Office Fund. The tower structure is approximately 210 metres (690 ft) above Elizabeth Street, however with it two 54-metre (177 ft) communications masts (which extend 35 metres (115 ft) above the apex), the tower is 246 metres (807 ft) tall.

ME Bank and Allianz have signed up to move into the building replacing space currently tenanted by BP and Telstra. They have taken up building signage rights.

The Shot Tower is the focal point of the shopping centre, with the cone purposefully built to protect the National Trust building. A few shops are tenanted inside the building including R.M. Williams. Recently, a museum opened inside the tower on its history. Entry is free.

The watch, designed by Seiko, was given as a gift to the people of Melbourne. The watch has a twelve and a half metre, two tonne chain, which was taken down during the centre's refurbishment and has since not been re-attached. Every hour, on the hour, a marionette display drops down from the bottom of the watch with Australian galahs, cockatoos and two minstrels performing Waltzing Matilda, under the watchful gaze of some koalas. The Seiko branding has since been removed. 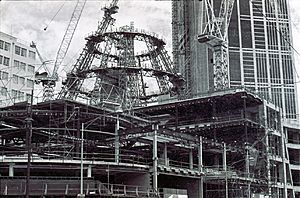 1989 - Melbourne Central during construction, including the glass cone. Image is a high-res scan of an original B&W negative.

The Glass Cone is the largest glass structure of its type in the world. The cone is 20 storeys high, weighs 490 tonnes and has 924 glass panes. The glass panes are cleaned by a specially designed mechanical system. Upon the centre's opening it was referred to as the "Magic Cone".

The vertical garden was pioneered by internationally renowned French artist and scientist, Patrick Blanc. The garden is soil-less and was a major part in transforming part of the Shot Tower's walls into a lush, leafy landmark. However, in 2013 it was replaced with an advertising billboard. 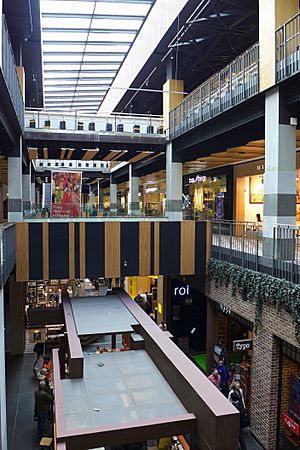 Void during renovation in 2017 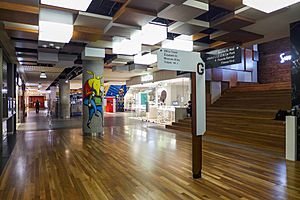 There is a glass footbridge across Lonsdale Street to Myer, with the layout of the centre allowing people to walk almost uninterrupted through some form of a shopping centre for over half of the city's width or 5 city blocks, from La Trobe street to Little Collins Street. This occurs via Melbourne Central which joins to Myer which in turn joins to David Jones over Bourke Street Mall. The glass footbridge was closed when Myer Melbourne vacated their Lonsdale store building. The footbridge re-opened in April 2014 when the Emporium Melbourne shopping centre opened.

Melbourne Central has a broad range of food outlets in two separate food courts. There is a food court on the lower ground level, on the same level as the entrance to the train station, where there are outlets such as McDonald's, Subway and KFC. Another food court is located on the Food On 2 level, accessible directly from the Corner of LaTrobe and Swantston Sts. by escalator. Food On 2 was closed in 2011 for redevelopment whilst adjacent to this, a brand new, larger food court, called the Dining Hall, opened in the first stage of its $30 million redevelopment.

The upper levels of the centre house a Hoyts Cinema complex as well as ten pin bowling, bars, Grill'd, and the Melbourne Central Lion Hotel an English style pub on the On3 entertainment level. The lower levels contain a Coles supermarket.

All content from Kiddle encyclopedia articles (including the article images and facts) can be freely used under Attribution-ShareAlike license, unless stated otherwise. Cite this article:
Melbourne Central Shopping Centre Facts for Kids. Kiddle Encyclopedia.