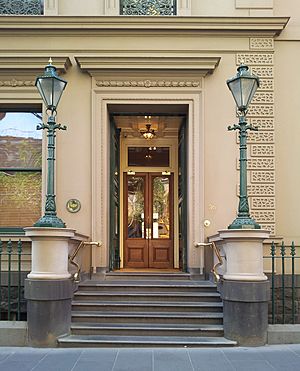 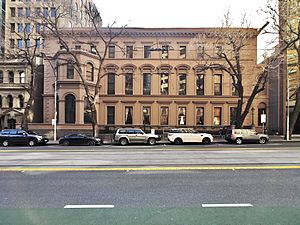 The Melbourne Club is a private social club established in 1838 and located at 36 Collins Street, Melbourne.

The club is a symbol of Australia's British social heritage and was established at a gathering of 23 gentlemen on Saturday, 17 December 1838, and initially used John Pascoe Fawkner's hotel on the corner of Collins Street and Market Street. 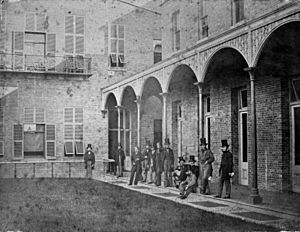 The Melbourne Club moved to new purpose-built premises at the eastern end of Collins Street, designed by Leonard Terry in Renaissance Revival style, in 1859. A dining room wing with a bay window was added at the western end in 1885, designed by Terry and Oakden. It includes, among other rooms, a library, main dining room, private dining room, breakfast room, billiard rooms, lawn room and bedrooms. The building is listed on the Victorian Heritage Register.

At the rear of the Club building is a private courtyard garden, maintained by arborist-horticulturalist John Fordham, which is also listed on the Victorian Heritage Register, and is the location of garden parties and private functions. The garden contains the largest plane tree in Victoria, according to the National Trust's Register of Significant Trees. 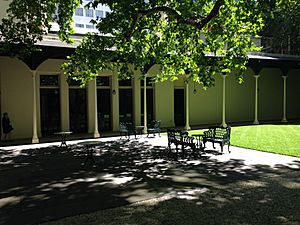 The Melbourne Club does not allow female membership. The female-only Lyceum Club, located directly behind in Ridgway Place, enjoys views of the trees of the Melbourne Club's gardens.

In October 1982, a "lunch-in" protest was held by members of the unemployed workers' group Work for Today, followed the next month by an occupation, resulting from a march of trade unionists and unemployed people.

Frederick Powlett (1811–1865) was a founding member in 1838 as well as being a founding member and the first recorded president of the Melbourne Cricket Club in 1838. He was a public servant, a police magistrate and later chief commissioner of Crown Lands.

All content from Kiddle encyclopedia articles (including the article images and facts) can be freely used under Attribution-ShareAlike license, unless stated otherwise. Cite this article:
Melbourne Club Facts for Kids. Kiddle Encyclopedia.