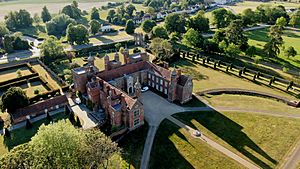 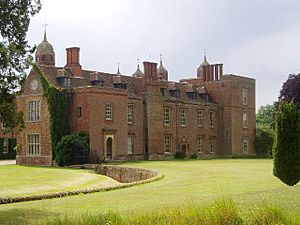 Melford Hall is a stately home in the village of Long Melford, Suffolk, England. It is the ancestral seat of the Parker Baronets.

The hall was mostly constructed in the 16th century, incorporating parts of a medieval building held by the abbots of Bury St Edmunds which had been in use since before 1065. It has similar roots to nearby Kentwell Hall.

It passed from the abbots during the Dissolution of the Monasteries and was later granted by Queen Mary to Sir William Cordell. From Cordell it passed via his sister to Thomas and Mary Savage before being sold back into another male Cordell line.

James Howell described the hall and garden in the times of Elizabeth Savage, Countess Rivers in a letter in 1619.

During the Stour Valley Riots of 1642 the house was attacked and damaged by an anti-Catholic crowd. In 1786 it was sold to Harry Parker, son of Admiral Sir Hyde Parker.

Beatrix Potter was a cousin of the family and was a frequent visitor to the hall from the 1890s onwards.

One wing of the hall was gutted by fire in February 1942 but rebuilt after World War II, retaining the external Tudor brickwork with 1950s interior design.

The hall was first opened to the public in 1955 by Ulla, Lady Hyde Parker. In 1960 it passed into the care of the National Trust. It is generally open on weekend afternoons in April and October, and on afternoons from Wednesday to Sunday during May to September.

All content from Kiddle encyclopedia articles (including the article images and facts) can be freely used under Attribution-ShareAlike license, unless stated otherwise. Cite this article:
Melford Hall Facts for Kids. Kiddle Encyclopedia.