The station used to be on the Hutt Valley Line section of the Wairarapa Line until 1 March 1954, when the Melling-Belmont section of the line on the western side of the Hutt Valley was closed and the through line to Upper Hutt and the Wairarapa rerouted through the centre of the valley. The truncated line to Melling was then electrified. The new station erected at the same time was about 100m closer to Wellington to avoid a level crossing at the Melling Link Road over the Hutt River.

In the 19th century, the line from Wellington to the Hutt was opened on 14 April 1874. The line past Melling to Silverstream was opened on December 1875. 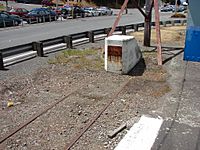 End of the line

The station building today contains a ticket office and a coffee shop. The building was closed without notice on 18 December 2013 for asbestos removal, reopening on 18 February 2014.

The Melling Station will be moved under the three 2018 NZTA options for replacing the Melling road bridge. The proposed Melling Interchange also involves flood protection work, and will be completed by 2026 (in 2019 the project had been put "on hold").

All content from Kiddle encyclopedia articles (including the article images and facts) can be freely used under Attribution-ShareAlike license, unless stated otherwise. Cite this article:
Melling railway station Facts for Kids. Kiddle Encyclopedia.