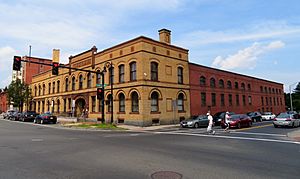 Memorial Square is now little more than a landscaped triangular area at the junction of Main and Plainfield Streets, with its northern boundary called Bradford Street. In the mid-19th century, the surrounding area was predominantly one of large estates of Springfield's business and civic elites. After the American Civil War, the area began to be developed, and the square became a focal point for civic development. The Memorial Church, which stands north of the triangular square, was built in 1866 to a design by Richard Upjohn and his son, Richard M. Upjohn; it is one of the city's architectural landmarks. On the west side of the square, the library was built in 1914 to a design by Edward Tilton of New York City; it is a significant local example of Italian Renaissance architecture.

On the east side of the square is a row of five buildings. The most southerly was built in 1897 as the trolley barn for the Springfield Street Railway, a business owned by George Atwater, one of the area's estate owners. To its north stands the Memorial Square building, at six stories the tallest facing the square; it is a primarily residential building constructed in 1911. Three houses stand to its north, two of them distinguished examples of Queen Anne architecture, as well as the Classical Revival former parish house for the Memorial Church.

All content from Kiddle encyclopedia articles (including the article images and facts) can be freely used under Attribution-ShareAlike license, unless stated otherwise. Cite this article:
Memorial Square District Facts for Kids. Kiddle Encyclopedia.