Mercuryville, California is a ghost town in the Mayacamas Mountains of Sonoma County, California along The Geysers road.

Mercuryville was founded in 1874. Around 1870 cinnabar, a mercury bearing ore, was discovered in eastern Sonoma County, about 60 miles north of San Francisco, about twenty years after the California gold rush had begun. Mercury is a dense liquid metal that can be used to separate gold from other less dense materials, and this drove up the demand and price of mercury to $1 a pound, making extracting the ore profitable, and prompting a short-lived mercury rush in the 1870s. When the price of ore dropped within a few years, most mines were quickly abandoned. In its heyday, the town had eight bars that were notorious for fights, and a single church. Mercury was also mined in other areas of Sonoma County at the time, including mines near Guerneville.

As per the name of the town, quicksilver (mercury) was the economic engine of the town, and there were several mines in the area. The nearby Socrates Mine, about 5 mile west of Mercuryville, produced mercury bearing ores including: cinnabar, montroydire, edgarbaileyite, magnesite, and tiemannite. The mine also bore other minerals including chalcedony, opal, and pyrite. The area has considerable geothermal resources, with active fumaroles and hot springs. Located nearby is the Geysers, the world's largest geothermal energy generation facility that provides 725 megawatts of energy; it produces enough electricity to power the city of San Francisco.

By 1956 the settlement of Mercuryville had diminished in population to a population of two, and the town now consisted of a gas station/store that doubled as a home for an elderly couple. By this time the nearby Geysers resort was rundown with a main pool and a few smaller gender segregated pools. By the mid-1960's the gas station had closed and Mercuryville had become a ghost town. One of the last remaining large mine buildings was burned in wildfires in the mid-1970's, although some concrete structures and metalwork from the mines remain. 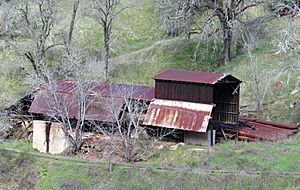 Abandoned quicksilver mine near Mercuryville, California 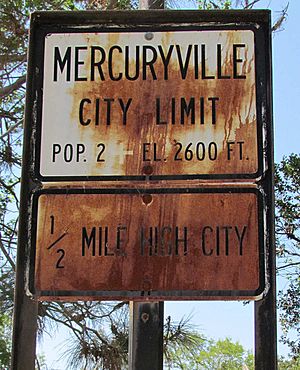 All content from Kiddle encyclopedia articles (including the article images and facts) can be freely used under Attribution-ShareAlike license, unless stated otherwise. Cite this article:
Mercuryville, California Facts for Kids. Kiddle Encyclopedia.