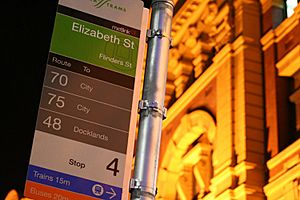 Metlink is the marketing name for all public transport operators' in Melbourne, Australia.

The Metlink brand was introduced in 2003.

Metlink has also been active in the use of 'value Metcards' (like credit cards but work only for trains) and is known for running a "funny" campaign called BATBYGOBSTOPL (Buying A Ticket Before You Get On Board Saves Time Or Problems Later). In July 2007, Metlink launched a new campaign, "I Highly Recommend You Get on the Bus", featuring musical comedian Frank Woodley, to improve bus services. [1]

While they do not have control, representatives of the Bus Association of Victoria and V/Line have helped Metlink.

Victoria's regional bus and rail services will at some future date be brought under a similar brand to Metlink named Viclink. Signage upgrades at regional railway stations have started from October 2006 [2]. The signage will be fully implemented when V/Line is re-privatized following the completion of the Fast Rail project

All content from Kiddle encyclopedia articles (including the article images and facts) can be freely used under Attribution-ShareAlike license, unless stated otherwise. Cite this article:
Metlink Facts for Kids. Kiddle Encyclopedia.