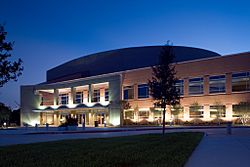 The MetroCenter in Arlington, Texas

The MetroCenter is located in Arlington, Texas and was opened in January 2005. It was built entirely with private funds and seats 1,750. It was designed by Beck Group Architecture and constructed by Manhattan Construction Company. Acoustic Dimensions designed the high end audio and video system and Ford Audio and Video handled the installation. Phase two of its construction will take the total seating capacity to 3,200.

All content from Kiddle encyclopedia articles (including the article images and facts) can be freely used under Attribution-ShareAlike license, unless stated otherwise. Cite this article:
MetroCenter (Arlington, Texas) Facts for Kids. Kiddle Encyclopedia.