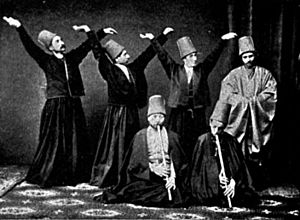 The Mevlevi or Mevleviyya order, or school (tarika) of Sufism was founded by Hazrat Sheikh Mevlana Jalal-ud-din Rumi. He was also sometimes known as Jalal-ud-din Balkhi as he came from Balkh, Afghanistan, and settled in Konya, (modern Turkey). This order is also called the 'Order of the Whirling Dervishes' because of the famous sema whirling/dancing ritual that they practice.

All content from Kiddle encyclopedia articles (including the article images and facts) can be freely used under Attribution-ShareAlike license, unless stated otherwise. Cite this article:
Mevlevi Facts for Kids. Kiddle Encyclopedia.