MiWadi is an Irish soft drink brand owned by Britvic, and formerly by Cantrell and Cochrane (C&C), bottled in Dublin, Cork and Belfast.

Its name comes from the initial letters of C&C's predecessor company, Mineral Water Distributors, which was formed in 1927. The range includes blackcurrant, lemon, lime, and orange & pineapple fruit squashes, with additional flavours produced on a seasonal basis, such as peppermint, and clove.

The slogan of MiWadi is "It's not your Wadi, it's MiWadi", seen on MiWadi bottles and commercials. The drink suffered declining sales during the 1990s, occupying only 16.4% of the market share by 1995, but it experienced a sales renaissance in the 21st century and as of 2005 it accounted for 37% of fruit squash sold in the Irish market. 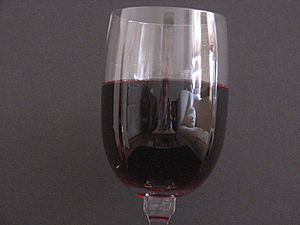 All content from Kiddle encyclopedia articles (including the article images and facts) can be freely used under Attribution-ShareAlike license, unless stated otherwise. Cite this article:
MiWadi Facts for Kids. Kiddle Encyclopedia.