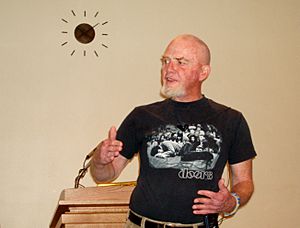 Michael Lennox Blake (July 5, 1945 – May 2, 2015) was an American author and screenwriter. He was best known for the movie adaptation of his novel Dances with Wolves, for which he won an Academy Award and a Golden Globe.

Blake was born in Fort Bragg, North Carolina, and grew up in New Mexico, Texas and Southern California. He was married and had three sons.

All content from Kiddle encyclopedia articles (including the article images and facts) can be freely used under Attribution-ShareAlike license, unless stated otherwise. Cite this article:
Michael Blake (author) Facts for Kids. Kiddle Encyclopedia.