Portales is a city in and the county seat of Roosevelt County, New Mexico, United States. The population was 12,280 at the 2010 census. Portales is located near the larger city of Clovis, as well as Cannon Air Force Base, a major contributor to the economy of the region.

Eastern New Mexico University opened in Portales in 1934 as Eastern New Mexico Junior College, and has since grown to become the third-largest university in the state. The area is one of the largest producers of Valencia peanuts in the United States and is the nation's top producer of certified organic peanut butter. Portales is home to about 40 dairies and a major US dairy solids plant, together producing and exporting hundreds of millions of dollars of local milk products each year. It is the principal city of the Portales Micropolitan Statistical Area, which is part of the larger Clovis-Portales Combined Statistical Area, including Clovis, 19 miles (31 km) away and Cannon Air Force Base, 13 miles (21 km) away.

The city's downtown area is centered around a traditional-style town square, based upon Spanish urban design. The center of the town square includes the 1930s WPA-style Roosevelt County Courthouse, including original architectural details from the era, as well as the adjacent 1930s Post Office. The Courthouse Square is ringed with retail shops. The Yam Theater, a historic theater located in the downtown area, has recently been renovated. Eastern New Mexico University (ENMU) forms a sizable district with its campus and surrounding residential stock catering largely to students. Arts and cultural offerings emanate from Eastern New Mexico University, the third largest state university in New Mexico. Portales ranks in the top 20% of US cities for racial diversity, percentage of college educated adults, and percentage of people who walk or bike to work. Portales rates in the top 10% of US cities for a short commute, rent affordability, and low taxes.

Clovis Man inhabited the Blackwater Draw area north of Portales until 11,000 years ago.

Semi-nomadic non-Pueblo Southern Athabaskan groups (Apache, Navajo) occupied much of the area as early as the 13th century. In the early 18th century, the Comanche displaced the Apache who had previously lived in this region. The Comanche commanded the area until late in the 19th century.

The surrounding area of eastern New Mexico is part of what came to be known in the colonial period during Spanish rule as the "Llano Estacado", an arid and treeless plateau bounded on the north and west by the Caprock Escarpment stretching south from the Canadian River and east along the Pecos River. The Spanish soldier and explorer Francisco Vázquez de Coronado, the first European to traverse the area in 1541, named the region after seeing these cliffs. From the north they resemble a stockade ("estacada") surrounding the high table-land, thus the name, meaning "Stockaded Plain" or "Palisaded Plain."

The US territorial settlement of Portales occurred in the late 19th century as cattle herders discovered a water source emanating from a rocky ledge resembling a Spanish porch. The local watering hole took on the name "Portales", and a few settlers began ranching nearby. The City of Portales was formally established in 1909 with the arrival of the railroad to the southwestern High Plains. The first Mayor of Portales was Washington Ellsworth Lindsey, who later became a state Governor of New Mexico.

The town developed in an orderly fashion through the early 20th century. In particular, given its access to the Ogallala Aquifer, improved surface irrigation techniques supported steady growth in agriculture.

Eastern New Mexico University was established in 1934 as a teacher's college. Originally a junior college, it became a four-year institution in the mid-20th century. The Great Depression brought several important Works Progress Administration (WPA) construction projects including the Eastern New Mexico University Administration Building, the downtown Portales Post Office, and the Roosevelt County Courthouse. All three buildings are listed on the National Register of Historic Places.

Portales has a semi-arid climate (Köppen BSk) with hot summers featuring most of the year’s rainfall from thunderstorms during the latter half of the season, plus dry winters with typically freezing mornings and mild, sunny afternoons.

As of the census of 2000, there were 11,131 people, 4,188 households, and 2,659 families residing within the city limits of Portales. By 2007, the number of people counted in Portales, including those within the city limits and in the nearby surroundings had grown to nearly 17,000 people (University of New Mexico BBER). Eastern New Mexico University had over 4,300 students and 700 faculty and staff in 2008.

According to a study conducted by Bizjournals.com, of 577 micropolitan areas, Portales ranked 15th in the nation and ninth in the western United States in overall quality of life. The goal of the study was to identify America’s most attractive micropolitan areas and points were given to small, well-rounded communities where the economy is strong, traffic is light, the cost of living is moderate, adults are well-educated, and access to big-city attractions is reasonably close.

The study identified 12 categories including population growth, per capita income, small business growth, professional jobs, commuting, cost of living, and advanced degrees. Cities were given points for positive results and negative scores if they were below the national averages. These scores were then totaled to determine its overall rank on the list of micropolitan areas. 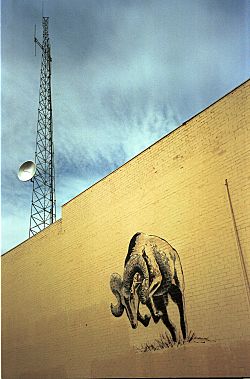 Portales, the smallest city in the top 25, received a quality of life score of 8.96, the 15th highest score in the nation. According to Scott Thomas, the author of the study, the income per capita, short commuting times, low taxes, and substantial percentage of adults with a graduate degree contributed to the ranking. Los Alamos was the only other New Mexico city to be recognized in the top 20.

The economy of Portales and surrounding communities is strongly supported by the peanut and dairy industries, ENMU, value-added food processing, a growing military presence, and agriculture (including cattle ranching, dairy farming, and crop production). In recent years, the economy of Portales has grown significantly along with the price and volume of agricultural commodities being produced in the region. The area around Portales is also drawing increased attention for its abundance of steady wind power, solar energy, and biofuel feedstock.

Portales continues to be a major U.S. exporter of certified organic peanut products and a major U.S. processor and distributor of sweet Valencia peanuts. DairiConcepts with Dairy Farmers of America processes local milk into milk solids for domestic and export use.

In 2002, the US Census recorded wholesale trade of $53,713,000 and retail trade of $147,174,000 in Roosevelt County. In 2006, data from econometrics firm EMSI predicted that by 2015, Roosevelt County would experience over 50% employment growth in several key economic sectors, including professional and business services, education and health services, and manufacturing. The same report predicted over 100% growth in leisure and hospitality services in the Portales area by 2015.

Unemployment in Roosevelt County in 2007 averaged less than 3%, and the cost of living was around 83% of the US average, based primarily on the historically low but rising cost of housing in the area. By 2009, Portales continued to experience economic growth, with unemployment in the 3.7% range. It remained partially insulated from the national economic downturn of 2008-2010 due in part to a balanced economy based on agribusiness and staple food-product manufacturing (primarily peanut butter and milk), higher education, and a relatively strong local retail services market fueled by a growing population of ENMU students and Cannon Air Force Base employees.

All content from Kiddle encyclopedia articles (including the article images and facts) can be freely used under Attribution-ShareAlike license, unless stated otherwise. Cite this article:
Portales, New Mexico Facts for Kids. Kiddle Encyclopedia.