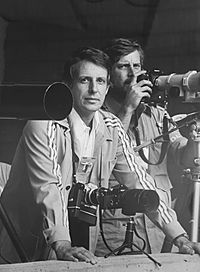 Michel Gravel (1936 – 13 January 2021) was a Canadian photographer. He was one of the most well known photojournalists in Quebec. He was born in Montreal, Quebec.

He worked for newspapers such as Le Devoir, the Montreal Gazette, and La Presse. He covered major events such as the Vietnam War and the 1976 Summer Olympics. He officially retired in 2005.

All content from Kiddle encyclopedia articles (including the article images and facts) can be freely used under Attribution-ShareAlike license, unless stated otherwise. Cite this article:
Michel Gravel (photographer) Facts for Kids. Kiddle Encyclopedia.